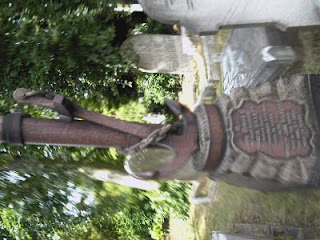 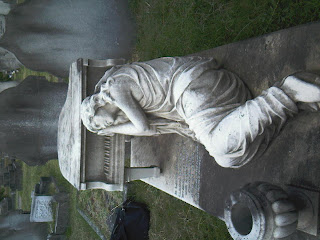 Following on from my visit to in February I went on a tour of the City of London Cemetery in yesterday. I had stopped at the lovely café by the gatehouse as part of a Ramblers walk last year but had no idea of the extent of the burial grounds. The Cemetery covers over 200 acres and is the biggest in the country. The memorial gardens within the cemetery are some 34 acres alone. The whole of is only 37 acres.

David our guide was extremely knowledgeable about the Cemetery having worked there so we got to hear about the practicalities of burials and memorials as well as the history and stories connected with the graves.

The Cemetery came into being in the mid 19th Century because the churchyards in the City of were becoming overcrowded. David told us for example that St Andrew Holborn had so many dead in its graveyard that the ground was 15 feet higher than the street level and there was a danger of bodies overflowing onto the street. Some 12000 bodies were transferred from St Andrew to a new burial plot in this Cemetery and in recent years when they cleared the crypt another 3000 bodies followed. They had massively underestimated the amount of bodies in the crypt thinking there were only 700 or 800. Looking at the church’s website the crypt is now available for venue hire which doesn’t seem right given its past history.

Many of the other City churches cleared their graveyards when this Cemetery was created and the bodies were reinterred here. One memorial to St Helens Bishopsgate is said to include the body of Robert Hooke scientist and architect (amongst other things) who I had to confess I had not heard of before.

One of the most striking memorials we saw was that of Gladys Spencer a local music and dance teacher. Hers is the only memorial that includes a statue of a piano. According to David who has seen a picture of Gladys the representation of her is rather more attractive than she was in real life. She died aged only 34 in 1931. (Apologies I haven’t yet worked out how to save photos after rotating them!)

The tour was full of fascinating information and I could probably go on for another few paragraphs. However if you get a chance to visit and go on a tour I would definitely recommend it. The nearest station is which is only 12 minutes away from . As mentioned before there’s a great café with an outdoor seating area which is lovely on a sunny day.

4 Responses to Cemetery Tour no. 2