Arriving on the 18th floor of Westminster City Hall in Victoria Street I was rather nervous. I was about to get my guiding badge from the Lord Mayor of Westminster, Duncan Sandys, great grandson of Winston Churchill and at age 35 the youngest person ever to hold this office.

However on being invited into the Mayor’s Parlour we were greeted by our guiding colleagues offering us wine. What a relief. It was a very informal affair and we mingled and chatted and drank wine with our fellow graduates for some time before the formal part of the evening by which time I had had 2 glasses of wine and my nerves had gone. 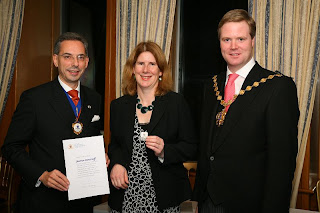 We were called forward individually and presented with the badge and a certificate. The badge is quite substantial and heavy. I was so pleased and excited to finally receive it.

After the ceremony we had the chance to look around the Plate Room in City Hall. I had expected this would be rather boring as the name didn’t really sell itself; however it was fascinating. A former Lord Mayor and the President of the City of Westminster Guide Lecturers’ Association Robert Davis was very enthusiastic and regaled us with the history and stories connected with the contents of that small strongroom that had been collected over the centuries. I came away wanting to know more.

The most fascinating story was regarding a tobacco box that had been given to the Society of Past Overseers as a gift in 1713 and inscribed with the name of the donor followed a few years later with the inscription commemorating an important historical event. Almost every year an event has been added although of course new receptacles were created. At first there were bigger and bigger boxes to fit inside each other rather like Russian dolls culminating in an enormous pedestal which was in the centre of the room. When that was full there followed a series of plates and other receptacles. 2013 is the 300th anniversary of this tradition and the Society is planning starting again from the very beginning with a new small tobacco box.

The Civic Plate Room isn’t normally open to the public but this year for the first time it was accessible as part of Open House weekend. Hopefully it will be open again next year so I can return for another look.

I was reluctant to leave City Hall with its fantastic views and wanted more time to look at the many historical paintings on the walls but the time came when we had to leave so we reconvened around the corner in the Adam and Eve.