I thought my worst nightmare had come true on Saturday morning whilst waiting to start my St James’s walk for some fellow City of Westminster Guides. Waiting for my group in the one shady spot on Queen’s Walk beside the Ritz a large London Walks group descended on the very same shady corner. One of my group members, J, said she wasn’t going to move as we had got there first. I agreed with her in principle but thought the rest of my group wouldn’t see me hidden by the second group so I moved further up the path towards Piccadilly. I could partly hear the commentary however and my heart sunk when I realised it was also a food and drink themed walk. Taking other qualified guides around was something I had been a bit nervous about anyway but how was I going to cope if I was following the same route as a London Walks group. Thankfully however they retraced their steps up Queen’s Walk and disappeared into the crowds on Piccadilly so my panic was over.

Probably due to the hot weather and the World Cup I was joined by only 5 people on my walk. After a slightly nervous start (I’m always the same) I got into my stride, lost my nerves and started enjoying the tour. 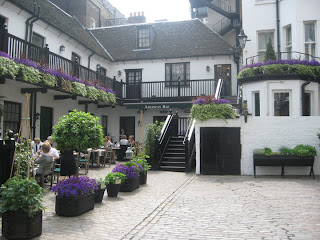 My St James’s food and drink walk has to be my favourite walk as it is one of those areas unknown to most Londoners and with many hidden courtyards and passages that even some people who have worked in the area haven’t come across.  In addition to the history of the coffee houses that evolved into gentleman’s clubs, the 19th Century celebrity chef and the cook who inspired the Duchess of Duke Street this walk includes a lot of current information about hidden cocktail bars and places for afternoon tea. I was a bit nervous about this aspect of the walk as although the man on the street likes this angle I did wonder whether other guides would also appreciate it. They did. I was amazed and pleased to see several of them taking notes.

As with all good guiding outings we finished in the Red Lion with a couple of glasses of Berry’s wine and I finally got to try the King’s Ginger – if you book my walk I’ll tell you about it!