Following on from my recommended lunchtime spots in Fleet Street my next area to highlight is Chancery Lane. As with my previous post it’s not exhaustive; in fact I know I made a couple of omissions and I may have to do a Fleet Street Part Two to include such gems as The Blackfriar, the Cheshire Cheese and Dr Johnson’s House.

Starting with places to picnic on a sunny day there are several that spring to mind, each of which is fairly hidden so not obvious to the passer-by.  My favourite in this area has to be the gardens of Lincoln’s Inn in particular Stone Buildings.  These gardens are within the perimeter wall of Lincoln’s Inn and accessible either from Lincoln’s Inn Fields or Chancery Lane; they basically sit behind Stone Buildings.  There are a number of benches and a grassy slope to sunbathe on.  Like the other Inns of Court gardens they are only open to the public Monday to Friday lunchtimes.  They are also a lot lighter than these photos suggest. 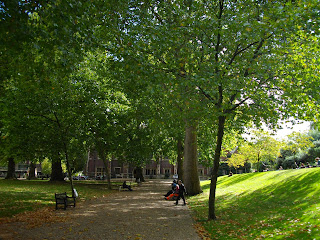 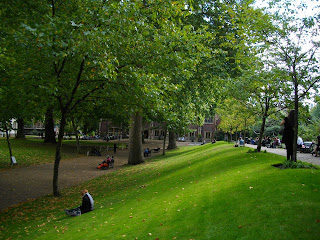 Another of the Inns of Court, Gray’s Inn’s gardens, can be accessed via the walkway next to the Cittie of Yorke pub (of which more later), from Theobalds Road opposite the library or from Gray’s Inn Road. These gardens are massive and again only open to the public weekday lunchtimes.
Although the small garden of Staple Inn  (behind the Tudor façade on High Holborn close to Chancery Lane tube) is closed to the public there is a circular bench in the courtyard and some more benches through the archway. It is remarkably peaceful there considering how close it is to the main road.
On your way to the Stone Buildings gardens you will pass Lincoln’s Inn Chapel. They offer occasional recitals the next ones being Tuesday 18 October and Tuesday 22 November from 1.05 to 1.50pm. If you’re interested in finding out more about Lincoln’s Inn on the first Friday of every month they offer public tours (ie just turn up) for £5.
More or less opposite the entrance to Stone Buildings is another London gem; this time somewhere to go on a rainy day.  The London Silver Vaults is an amazing place full of tiny vaults/shops open to the public selling items for all budgets from a Champagne swizzle stick right up to soup tureens and beyond. Starting tomorrow (3 October 2011) and continuing until the end of January is a selling exhibition of historical culinary silverware. Exactly my sort of thing as most of my walks are food and drink themed.
Continuing down Chancery Lane towards the Fleet Street end you will come across a shopping arcade called Chichester Rents. On the corner is the amazing gift shop Mercer & Wells but don’t get waylaid, continue into the passageway.  Up until now I would never have considered having my nails “done” but this might change now I’ve discovered MW Nails The shop is housed in the shell of an American Airlines Boeing 737.  It definitely sounds like a place that doesn’t take itself seriously evidenced by the names of some of the treatments. I have to admit I am tempted. 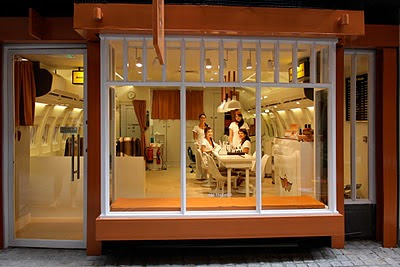 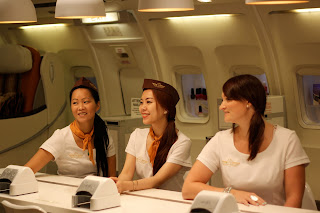 Back to my usual lunchtime interests and continuing with the historic theme Gresham College close to Holborn Circus has been offering free lunchtime and evening talks for around 400 years!  Coming up on 12 October at 1pm is a talk on the History of the Lord Mayor’s Show. No need to book but probably best to get there early.
Now onto one of my favourite subjects: pubs. The Sam Smiths’ pub the Cittie of Yorke is probably best visited at the weekend to appreciate its many qualities and to get a seat. There has been a place of refreshment on this site for many hundreds of years but the present incarnation isn’t as old as it looks. The back bar will take your breath away with its long bar, giant wine vats above and individual seating compartments. The cellar bar is worth visiting too and is much older than the rest of the pub.
My other favourite pub in the area is the quirky Seven Stars tucked behind the RCJ in Carey Street just off Chancery Lane. This pub has some of the most vertiginous stairs to toilets I have ever come across in a pub (but may be equal to those at the Red Lion, Duke of York St, SW1).
In researching this post I have just discovered the Castle, that I knew about but never visited; that will have to be remedied as it looks like it has a good choice of real ales.
Close to the Castle ie between Fetter and Chancery Lanes can be found the upmarket vegetarian restaurant Vanilla Black another place I would love to visit.
Not really a pub but more of a bar and also one I’ve yet to visit – the Craft Beer Co in Leather  Lane has only been open a few months. They claim to always have 37 beers on tap. Londonist reviewed it when they opened back in June. If you do visit look up at the amazing mirrored ceiling.
Leather Lane Market is of course an obvious place to spend your lunch hour (and your money). In the last few years it seems to have diversified with many more food retailers and an occasional visiting French Market but the fruit and veg and clothes stalls still remain.  If you make it down to the other end of the Market pay a visit to International Magic on the corner of Clerkenwell Road an amazing place.
Parallel with Leather Lane is Hatton Garden the street famous worldwide for its jewellers and diamond merchants.  Walking up Hatton Garden from Holborn Circus look out for the lamppost with the blue mitre by a hidden passageway. This is the entrance to Ely Court which links Hatton Garden to Ely Place and where you can find the Mitre another of the area’s fantastic pubs. 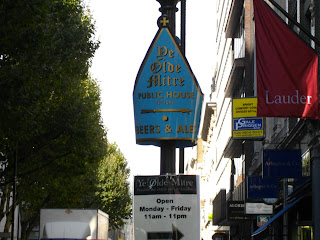 And one last place – not a lunchtime venue (apart from Afternoon Tease on Sunday afternoons) but something rather unexpected – Volupté which is a burlesque club.

Is there anything obvious I have missed?