Chingford: the best place to live in London

People are sometimes under the impression that because it is in Zone 5 and not on the tube then it must be miles away from the City.  That isn’t true. In fact the train to Liverpool Street takes only 25 minutes and if I change at Walthamstow Central for the Victoria Line I can easily get into the West End. The last train from Liverpool Street is also much later than many other lines being around 1am.
It’s not just the easy access to London which attracts me but the fact that I have Epping Forest at the end of my road. I mean this literally; not a car ride away but within 5 minutes’ walk from my flat I am in the Forest.
Epping Forest is the largest public open space in the London area at around 6,000 acres and has been owned and managed by the City of London Corporation since 1878. When Queen Victoria visited in 1882 she famously gave the Forest to the people of London saying: “It gives me the greatest satisfaction to dedicate this beautiful Forest to the use and enjoyment of my people for all time.”
At the end of my road is a path leading up Pole Hill from where there is a panoramic view of London although the view in the photo just shows Chingford! 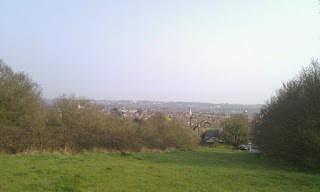 There’s an obelisk marking the Greenwich Meridian which has since moved 19 feet to the east and a plaque to author/soldier T E Lawrence (Lawrence of Arabia) who once lived on Pole Hill in a hut now removed.
Continuing with the history theme on Chingford Plain about 7 or 8 minutes’ walk from the station can be found Queen Elizabeth’s Hunting Lodge. As someone who grew up in this same area all I remember from my childhood were the stuffed animals which seemed to be everywhere and always gave me the creeps. Thankfully the museum has been totally transformed since the 1970s and is worth visiting as they have many exhibitions on Tudor life.
Until I joined a local cycle group a few years ago I had completely taken for granted the fact that I had a forest on my doorstep. I was amazed that people travelled for an hour in order to cycle there. The cycle group (MBR Over 35s) is still going but I’m no longer part of it. I was never quite fit enough!  Looking at the photos on their website now I’m amazed I was ever part of it as am more suited to a pootle along the bridleways and am not keen on going fast or on too much single track. As someone once pointed out to me I had “All the gear but no idea”!
My busy life as a guide has got in the way of my regular cycling trips but I do still want to get back out in the Forest as realise I am very lucky to live where I do.
51.63042419.833

2 Responses to Chingford: the best place to live in London