Published 16th November 2011 | By Joanna
Having lived in London all my life I used to regularly attend the Lord Mayor’s Show with my family when I was a child. However apart from one visit in 1996 after returning from 9 months in the Antipodes this is something I haven’t really done as an adult although have usually watched it on TV.

Having done a History of the City course earlier in the year and intending to apply for the City of London Guiding course in 2012 I have recently become more interested in the City. This prompted me to accompany some fellow Westminster Guides to the Show last Saturday several of whom are current City of London students.

Everyone in London recognises Boris Johnson as the Mayor of London.  However the name of David Wootton, the 684th Lord Mayor of the City of London is less well known.
There has been a Lord Mayor in the City since the 12th Century, the first being Henry FitzAilwin who served from 1189 until his death some 20 years later.  However they weren’t calling themselves “Lord” Mayors until some 400 years later. The most famous Lord Mayor is of course Dick Whittington. Unlike the pantomime story he was the son of a wealthy Gloucestershire landowner who came to London to apprentice as a mercer, (someone who deals with silk and other luxury fabrics). He held office 3 times in the late 14th and early 15th centuries.
We had amongst us a frequent attendee of the Show who over the years had found the optimum place to view it from. I’m not saying where it is (to keep it exclusive!) but eagle-eyed readers will be able to tell from the photos.
We met early to view the river pageant. For several hundred years from the 15th Century the Show took place on the river which is where the term “float” comes from. This year a pageant of approximately 22 traditional Thames Waterman’s Cutters escorted the new Lord Mayor aboard the shallop “Jubilant” from Westminster through Tower Bridge to HMS President where he continued his journey by coach to Mansion House.
However I misunderstood our meeting instructions and managed somehow to be on the wrong side of the river from the rest of the group. I was wearing thermals too, having completely misread the weather forecast, so by the time I caught up with everyone I was roasting. I saw Tower Bridge rise which is something I will never get tired of but somehow missed the pageant although it was going through the Bridge at the time!  As an aside Tower Bridge’s openings are listed here and are fairly frequent eg this Saturday 19th November it will raise 4 times to allow for the paddle steamer Dixie Queen to pass through.
We arrived at our vantage point in the City for the road procession with 45 minutes to spare. I felt privileged to be able to see well without too much effort. It was great too to be with trainee City guides; hopefully next year I will be in their position. Dominic Reid, the Pageantmaster was pointed out who had recently given a Gresham College lecture at the Museum of London. The lecture was fascinating and can be viewed online. I was surprised to find out that the whole procession is organised by just two people, Mr Reid and his PA.  For those interested in more of the City’s history Gresham College recently had a lecture on the Freemen of the City of London and coming up on 7th December there is one on the Livery Companies. All these lectures are free and definitely worth attending or watching online. 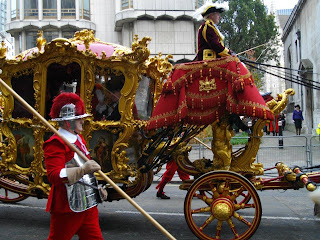 We stood and watched as some 150 floats (representing many livery companies and associations) historic marching bands, vintage vehicles and dancers passed us by. We were impressed by the multi-tasking musicians on horseback and the skill of the stiltwalkers. We also did a lot of waving as did the group of aldermen standing opposite us who had the privileged position of both watching the procession and taking part in it. Appropriately coming up at the rear of the procession was the City of London Cleansing Department! 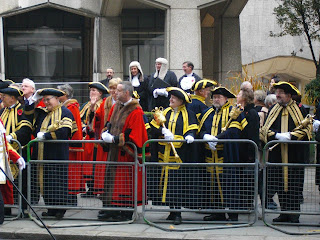 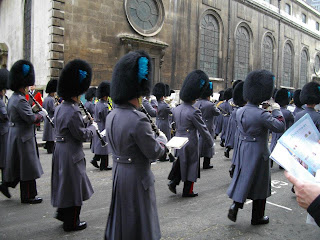 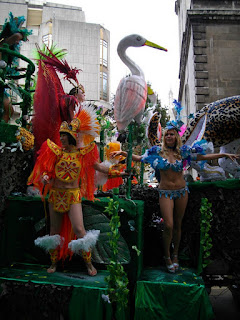 After lunch and a few pints in the historic Cheshire Cheese in Fleet Street a few of us carried on to the Blackfriar the amazing art nouveau pub near Blackfriars. Taking up much of the room in the interior were the Greensleeves Morris Men. The dancing had finished before we got there but the singing had begun. I made my way to the bar whilst listening to the old Music Hall song I’m Henery the Eighth I Am.  I had hoped we could watch the Lord Mayor’s fireworks whilst standing outside the pub but although we could hear them and see the reflections our view was obscured by Unilever House. However standing listening to the singing with a beer in hand was still a perfect end to a fantastic day.
The author of this blog (Joanna Moncrieff) is a qualified City of Westminster Tour Guide who specialises in food and drink themed walks in the West End.
Details of all her walks are listed here and upcoming public walks are here.
Search