This post originally appeared on fellow guide Pete Berthoud’s London blog which is well worth bookmarking for his amazing London knowledge. Whenever I want to know about a new sculpture somewhere in the City I check his blog first.

Just to clarify – following an erroneous article in the press last night – this cafe/bar is here to stay and won’t be closing. Clarification has come direct from the owner.. 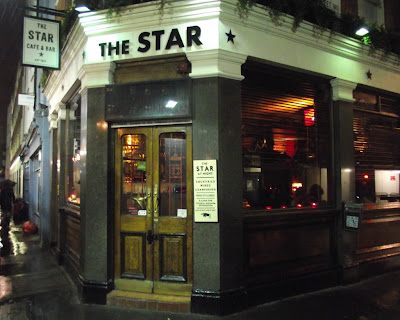 I’m always exploring London looking for hidden cafes and tucked away pubs to feature in future guided walks. So when I was told about an unusual cocktail bar in Hollen Street, W1 I was intrigued. I couldn’t initially place where Hollen Street was so it was even more of a treat, first of all finding an amazing cocktail bar, plus going down a street I’d never been to before (that could just be a London obsessive thing).

Hollen Street is on the very edge of the Crossrail development just north west of Soho Square yards from Oxford Street.

On the corner of Hollen Street and what’s left of Great Chapel Street (partly swallowed up by Crossrail) the cocktail bar the Star at Night operates from the same premises as the Star Café which has been serving breakfast, lunch and tea to people working in the area since 1933; one of the oldest independent establishments left in Soho. The night-time bar is run by the grand-daughter of the original owner of the café.

It is an unpretentious, friendly bar serving first class cocktails, wine and food; the type of place I have been searching for forever.

On sitting down at your candlelit table your eyes are drawn to the collection of old enamel signs plastered around the bar.  Advertisements for “Goddard’s famous embrocation”, Bovril, Tizer and an ancient KP nut dispenser adorn the walls; there is always something to look at should your conversation dry up.

This is the place to come for a classic cocktail without breaking the bank. Most cocktails are £7 and are made to 5 star hotel standards with premium spirits. Small touches such as all glasses being polished before being used adds to the experience.

There are so many cocktails on the menu, which runs to 6 pages, it’s very hard to choose. I’m no way an expert on cocktails but this is an amazing list. The blazer cocktails and nightcap shots served in glasses made of ice sound especially tempting.

They have seasonal specials too so I went for the Christmas Pudding Blazer which comprised of dark rum and brandy flamed with fig syrup, cinnamon and orange peel served in a warm brandy sniffer. I have never had a warm cocktail before and this was absolutely amazing to drink; Christmas in a glass!

I was also tempted by the faux egg nog which is an eggless blend of 5 ingredients including spiced rum and limoncello. I’m rather partial to a drop of limoncello and I was amazed to discover that The Star’s limoncello is made locally. Soho has so much more for me to discover.

It’s not just cocktails though as there is a good wine list, beers, soft drinks and mocktails too. I loved the touch that the tap water was served in old Hendricks Gin bottles.

The food is good too with plenty to soak up the alcohol, it’s a tapas style menu including tortillas, bruschetta and a cheese board with the most expensive item being  just £6.75.

I have a significant birthday coming up in 2012 and after spending a fantastic few hours at the Star at Night think I may have found my perfect party venue.

They are open Tuesday – Saturday, 6pm – 11.30pm and directions can be found here.

The author of this blog (Joanna Moncrieff) is a qualified City of Westminster Tour Guide who specialises in food and drink themed walks in the West End.
Details of all her walks are listed here and upcoming public walks are here.
Search