Having lived in North-East London most of my life there are great chunks of outer London that I don’t know at all well. I can probably say too that I know Central London better than my own immediate local area

I recently had the opportunity of attending a play at Strawberry Hill House near Twickenham which is one of those areas I know little about.
Knowing that it would take me probably 2 hours to get home after the play I decided to make a day of it and fit in a visit to Ham House too.
I probably overdid it a bit though. In the morning I led a small group of people around St James’s discovering Gentleman’s Westminster. I then grabbed a quick sandwich from M&S and boarded the District Line to Richmond where I promptly fell asleep!
However arriving at Richmond station with the sun streaming through the glass roof I immediately felt better as if I was on holiday; in fact Richmond station was very similar in style to King’s Lynn station in Norfolk which definitely upped my mood. Knowing that I would be walking and standing a lot later (the play was a promenade performance) rather than walk to Ham House I got the bus. The bus ride was quick and once away from the main shopping street took us along some country lanes, dropping me off in the village of Ham.
As I approached Ham House I realised I had previously visited a couple of years before on a ghost tour. This time my choice of house had been restricted as although there is quite a selection – Marble Hill House, Syon House, Chiswick House, etc – most of these weren’t open at the time of my visit which was two weeks before Easter. The other deciding factor was whether I could get in for free with my National Art Pass. Ham House ticked all the boxes. 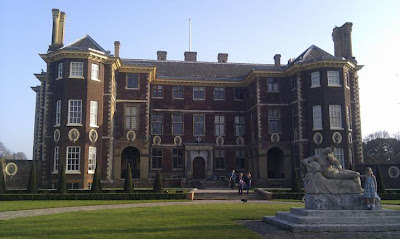 Although I had previously visited I had forgotten how stunning this building was. It was built in the early 17th Century and somehow much of its contents including silk wall hangings had survived. The self-guided tour took in one amazing room after another. Each of the rooms had its own National Trust volunteer who were all extremely knowledgeable. A former brewer was looking after the basement brewery; his stories were fascinating. I learned about 500+ year old books in the library which were in practically pristine condition; the reason being (it was thought) because they were in Latin and no-one had read them!
Ham House is well worth visiting – it really is an amazing place. If you don’t have a National Art Pass or National Trust membership it will cost you around £10 to get in so might be worth investing in either of the memberships.
Whilst chatting to one of the volunteers I discovered that I could get a ferry across the river rather than the long way round by bus. Hammerton’s Ferry has been delivering people across the river between Ham House and Marble Hill House for over 100 years. I was told to wave to the ferry which would come and pick me up. This wasn’t necessary as there was a bit of a queue. It was obviously something all the locals knew about because of the amount of people with bicycles and pushchairs.
After paying my £1 and journeying across the river I walked the rest of the way to Twickenham mostly along the river passing a very interesting looking building – the Orleans House Gallery. Unfortunately I arrived too late to investigate but hope to return on another occasion maybe when I visit Marble Hill House.
After a break for food in Twickenham I finally arrived at Strawberry Hill House, Horace Walpole’s gothic masterpiece. 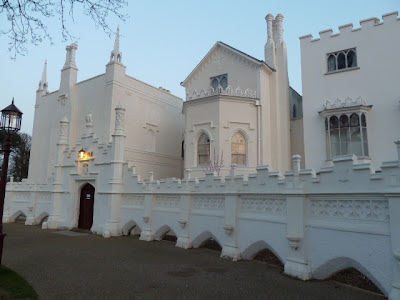 (Photo by Debbie Spiers)
The birds were singing and it was warm enough to sit outside with a glass of wine before the play. My review of The Sign of the Strawberry for Londonist can be found here.
That area of London has so much more for me to discover – I will have to venture west again very soon.
The author of this blog (Joanna Moncrieff) is a qualified and insured City of Westminster Tour Guide who specialises in food and drink themed walks in the West End.
Details of all her walks are listed here and upcoming public walks are here.
Search