(No) View from the Bridge

Published 4th June 2012 | By Joanna
Last year I watched the Royal Wedding on TV but regretted not going into town to experience the atmosphere.
So I wanted to do something this year for the Diamond Jubilee. However a busy week followed by the start of a head cold made me dither about arrangements deciding only on Sunday morning that I was going to go up to town. “Town” in my case being about 45 minutes away by train/tube.
I admit I left home a bit later than I should have but the intention was to aim for Bermondsey and then walk back towards Potters Fields and More London near Tower Bridge hoping to sneak down one of the alleyways or through Hay’s Galleria to get a reasonable view. What I hadn’t anticipated was that all these walkways would be blocked off and it would be impossible to get to the riverside.
Seeing hordes of people walking towards me down Tooley Street heading east I nearly gave up realising that they had probably tried all the various spots west of there. However I thought I would try one more place – the area in front of the Mudlark pub. That was blocked off too. However I did manage to buy myself a bargain sandwich outside The Mug House at London Bridge (salmon & dill plus a drink) for £2. Really tasty it was too.
I next found myself on London Bridge and somehow made it to the other side. My next target was the upstairs walkway that goes over Lower Thames Street that I had discovered on a walk with Colin Walks London and leads to what I thought would be a great viewing point. Unfortunately this was closed too.
I wasn’t feeling 100% so was starting to feel a bit weary and close to giving up.
My last attempt at a view was on the sloping plaza next to the Tower of London. There was a big crowd but because of the slope I could actually just about see the river. However my view was shortlived as I hadn’t anticipated that as soon as the flotilla came into view children would be hoisted onto their parents’ shoulders and my view disappeared completely. The rain started to come down heavily at that point so I decided to give up but on the way back to Tower Hill tube heard a cheer, turned round and saw the top of the Queen’s barge going past so at least I saw something. 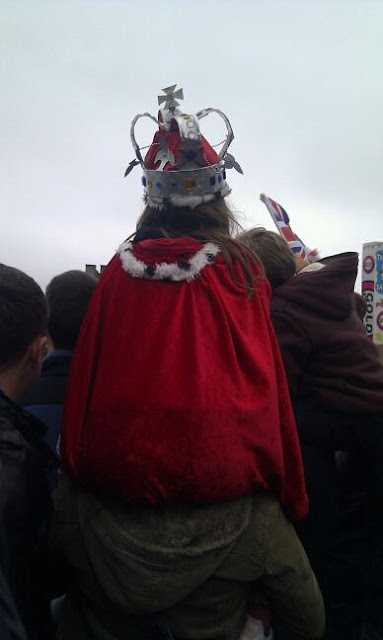 I headed back to Tower Hill tube with loads of others who had also decided to give up. Despite the crowds there was only a five minute delay in getting into the station. I headed east to Mile End to change onto the Central Line to go further east, was home within an hour and watched the last half hour on TV.
I’m glad I tried though.

5 Responses to (No) View from the Bridge