Those of us that live in London know it’s practically impossible to keep up with everything that’s on even if you subscribe to listings magazines and are a regular reader of Londonist and Ian Visits.

So if I stumble across a gallery with an exhibition unknown to me I will always visit on the spot rather than return at a later date as it is liable to get pushed to the bottom of the list and before I know it the exhibition has finished.

Earlier this week I was on my way to the library to return some overdue books. Walking along Paddington Street, Marylebone I noticed a poster outside the Hellenic Centre advertising an exhibition of rare photographs from the archives of The First Modern Olympics. 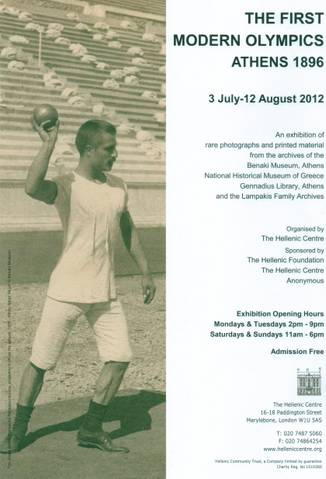 It was a fascinating exhibition. There was lots of information to read without having to pay £8 for a catalogue and I learned a lot. I particularly like the 1896 costumes which reminded me of a certain thermal underwear manufacturer’s adverts.

At the time of the 1896 Olympics Greece was in a similar financial situation to now; only 3 years before in 1893 it had been declared bankrupt. So it was an amazing feat for the country to put together and stage this first modern Olympics. It wasn’t without its problems though. Reconstructed from the remains of the Ancient Greek stadium the Panathenaic Stadium wasn’t completed on time. Only the first four tiers of seats were faced in marble, the rest being covered in wooden planks painted white.

Some other facts I gleaned from the exhibition were that the sport of boxing was omitted as it was insufficiently civilised and there was also no football because of a lack of participants.  There were however 43 events in 9 different sports.

As you can see from the poster this exhibition is open at rather odd times which completely misses the lunchtime office workers. However it is free to visit and really worth doing so. Paddington Street is less than 10 minutes’ walk from Baker Street station.

In researching this article I have also discovered that there will be an Olympic themed exhibition at The Royal Opera House from 28th July entitled “The Olympic Journey” and Westminster Archives have put together archives and memorabilia from previous Olympic Games and these items will be exhibited at the SW1 Gallery on the upper level in Cardinal Place shopping centre, Victoria Street from 25th July to 11th August.

But back to the the Hellenic Centre and there’s another reason to visit them as on Saturday 21st July they are holding a marathon reading of Homer’s The Iliad and everyone is invited to sign up for a time slot and go along to read or sing a passage. 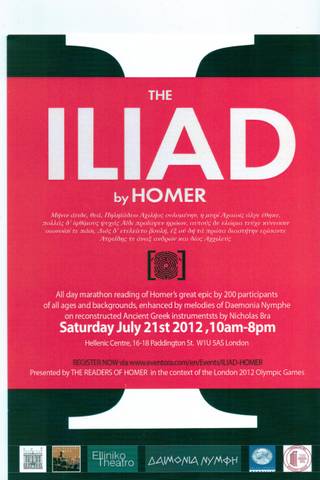 Another unusual London event and one that I would never have found out about had I not had to return overdue library books.

Details of the booking process are here. It is of course completely free. It sounds like an amazing event and I am planning on booking myself in for a reading slot. Does anyone fancy coming with me?

One Response to The First Modern Olympics – Exhibition in Marylebone