Since qualifying as a guide in 2009 I have discovered many new ways of researching for walks. Prior to studying for my guiding exam my previous learning had been for my O Levels back in the 1970s; things have changed a bit since then.

A miniscule example of the many useful online resources I use are British History Online and the Dictionary of National Biography freely accessible if you have a library card.

When planning a walk I also consult my never ending collection of London books. I may have to get rid of some of my other furniture as the bookcase is practically full! 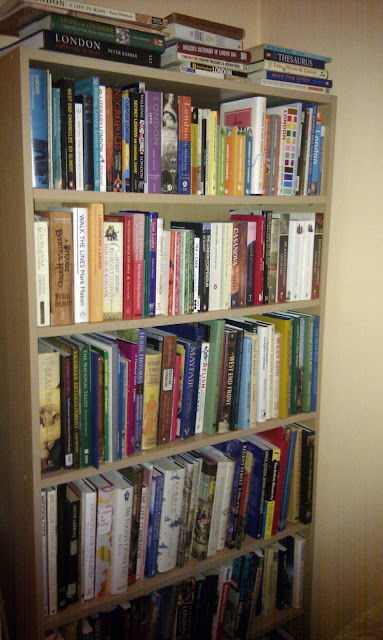 But it’s the archive centres and libraries I have discovered since qualifying that have been the most help in my research.

Our monthly Westminster Guide meetings take place at Westminster Archives a few minutes’ walk from Westminster Abbey. I have to admit the first time I actually went to the Archives to study I didn’t know what to look for and how to look for it but the staff are very welcoming and helpful and I have now been back on a number of occasons. To access the Archives you need to be a member of Westminster Libraries. Details are here. In addition for £14 a year you can become a Friend of the Archives.

The Archives occasionally have open days and there are ongoing events here and at all the other Westminster Libraries. I’m looking forward to attending a talk on the history of Covent Garden at Charing Cross Library on 25th March. The last event I attended at the Archives was a talk by the author of a new book about Jerome K Jerome.  I was very surprised that a late arrival was none other than Stephen Fry! He left before the end (he was appearing on stage that night) and if the man at the desk hadn’t also seen him I don’t think anyone would have believed me!

Until I became a guide I had never come across Westminster Reference Library before even though it is situated only a few seconds’ walk from Leicester Square. They hold books on a number of subjects but the main reason I visit is for their vast collection on the Performing Arts. I’ve just this minute discovered there is also a collection on Sherlock Holmes (currently held at Marylebone Library). Westminster Reference Library hosts a number of events including the rather unusual readings through of long forgotten musicals (with audience participation). The next read through is of A Gaiety Girl on 9th April. Scroll down on this link for details.

The Guildhall Library is another location with an amazing book collection. In fact I remember now that I wrote two separate blog posts about their collection back in 2009 and in 2010! They also have an ongoing series of fascinating events.

Some of the collection from the Guildhall Library can now be found at the London Metropolitan Archives located a mile north east of the Guildhall.  The LMA houses thousands of archives, records, images, films and maps connected with the City of London. To access original documents you need to apply for a history card. A list of events and exhibitions happening at the LMA can be found here; if only there were enough days in the week to attend all that goes on in London!

A couple of minutes’ walk from Liverpool Street station can be found the Bishopsgate Institute. Although I have attended courses, events and even a tour of the library I have yet to visit the library for study. I hope to remedy that soon.

Since qualifying I have joined a number of associations; the best one so far being London Historians which I would recommend joining if you want to meet other people obsessed with London’s history many of whom are authors of the very same London books that are on my bookshelves.

It was on a tour organised by London Historians last week that I discovered the Wellcome Library and what I had been missing there. Although I had heard of the library and already followed them on Twitter I had no idea that a collection on the history of medicine would be of so much use to me.

I was amazed to discover that the collection was much broader than I had anticipated and includes vast sections on food and drink including several hundred recipe manuscripts ranging from the 16th to the 19th Century, an art collection of some 250,000 images (online) and many books on subjects ranging from literature to astrology.  Details of what the collections contain can be found here. The library is separate from but within the same building as the fantastic Wellcome Collection.

Our tour was followed by a fascinating talk by Senior Archivist Chris Hilton, some of the images and text he talked about can be found on this blog post including mention of a murder on Waterloo Bridge and body snatching. After the talk we were shown the originals of some of the things we had seen on the slides including a letter written in 1665 at the time of the Great Plague. Fascinating.

It was too late to join the library when we left the building but I will return as know the collection there and online (once I have joined) will be of much interest to me.

Are there Central London libraries/archives I have missed?  If so, let me know! I will never get tired of learning more.