Published 30th August 2014 | By Joanna
Twitter has improved in the 2 years since I wrote my original post so I have updated it (with screenshots this time thanks to the amazingly useful Dropbox).

I am rather obsessed with social media and I’m always going on about how Twitter or Facebook and of course blogging are good for getting your name (and business) known. You may wonder how Twitter can help you so much as you are limited to 140 characters per tweet but it is amazing once you know how.

Start off by going to the sign up page of www.twitter.com and creating yourself a Twitter ID. This needs to be l4 characters or less.
“WestminsterWalks” was too many letters so I am @WWalks. You don’t have to put your real name on the sign-up page but whatever you put will appear next to your Twitter ID on your tweets. “WminsterGuides” is “Westminster Guides” but my Twitter page “WWalks” has my real name next to it. If you use your real name in this way people that don’t know your Twitter ID will still be able to find you.
Once you are signed up create a short profile stating what you do and ideally include a link to your website. It is also preferable to have a photo to show you’re serious about Twitter. You could maybe use a logo if you don’t want to use a personal photo.
How to start
Even before you are following anyone and have no followers it’s best to do one or two tweets introducing yourself so potential followers can see who you are.  You could just say something about a walk coming up or have a link to your website. If people look at your profile and you haven’t tweeted yet they are unlikely to follow you.
If you click on “Home” you will see a picture of a quill pen on the far right hand side. Click on this and a box comes up. You can then type, add photos and even add your location. 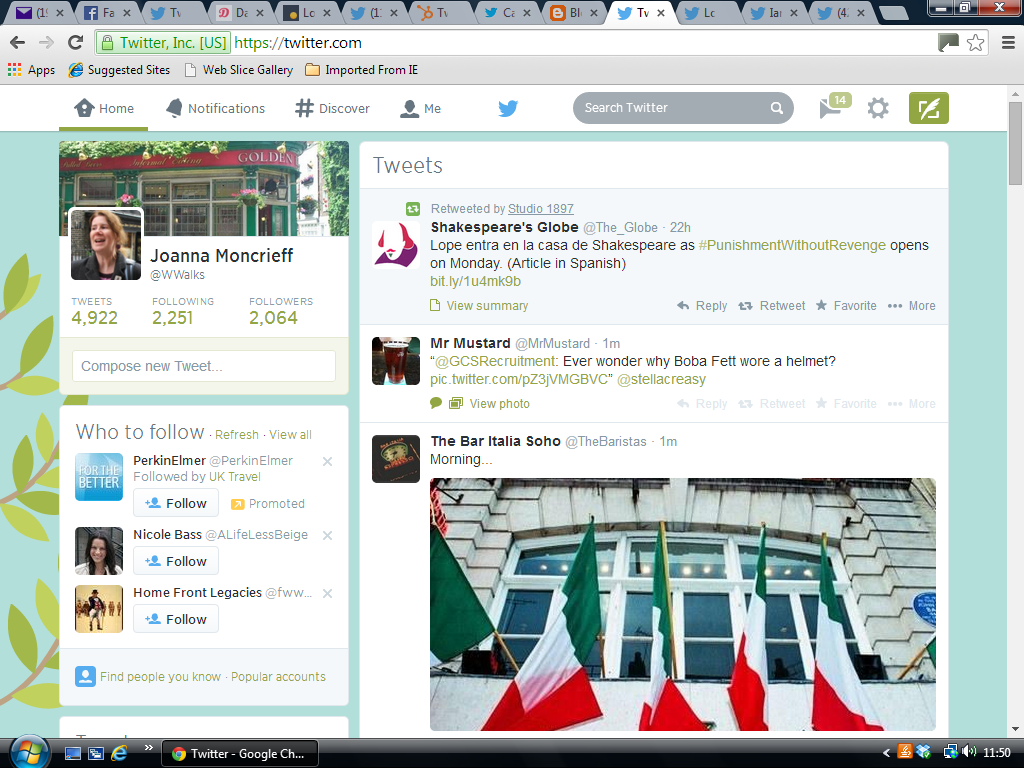 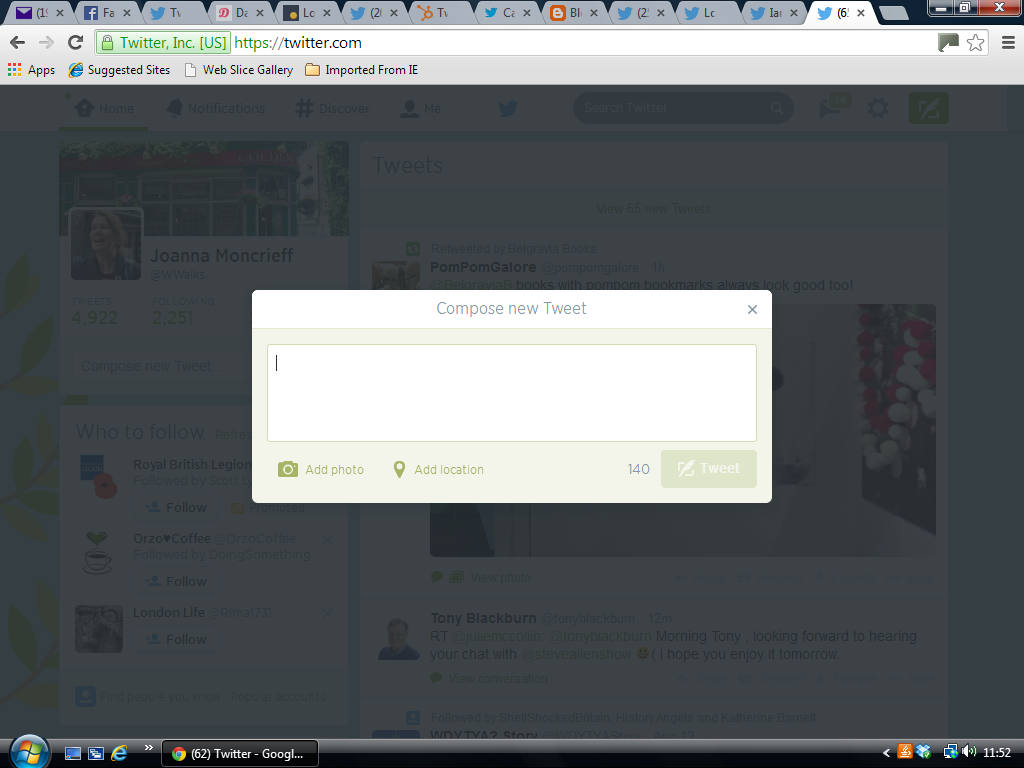 What to Tweet
I tweet about walks coming up but I also tweet about things I find of interest in London and think worth sharing. Reply to others’ tweets (the option to “reply” is underneath each tweet), get involved and share information via the re-tweet button. If people realise you are willing to share they are more likely to reciprocate. There is also the option to favourite (ie like). 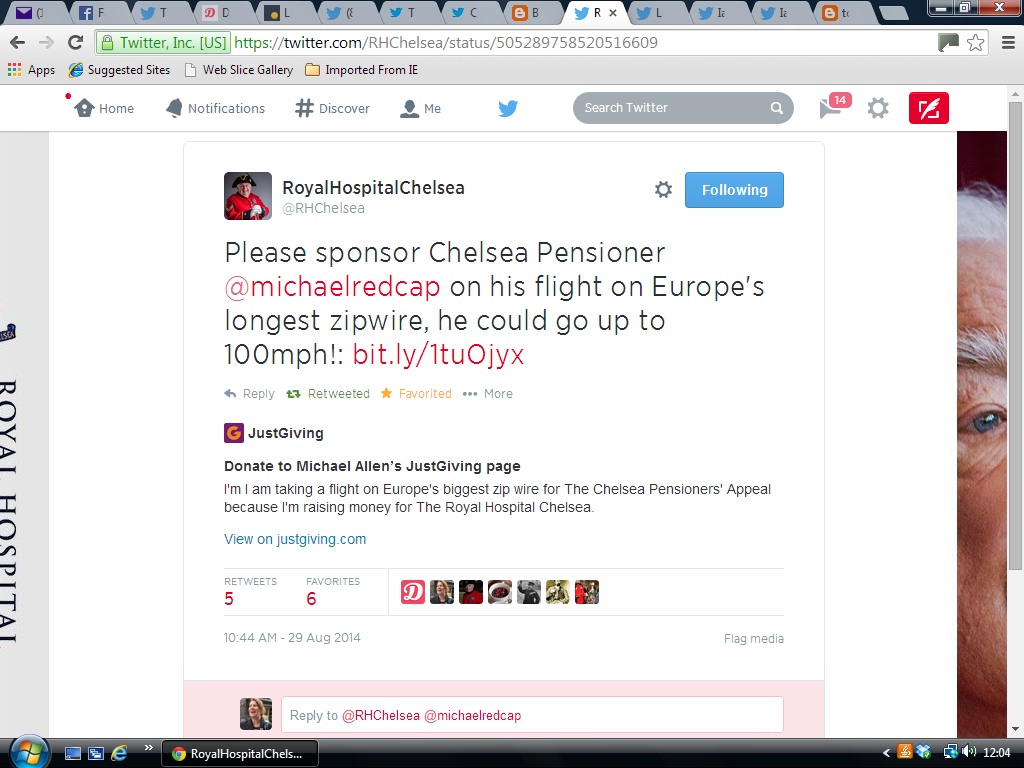 Links
Links are automatically shortened so there’s no need to worry about their length. 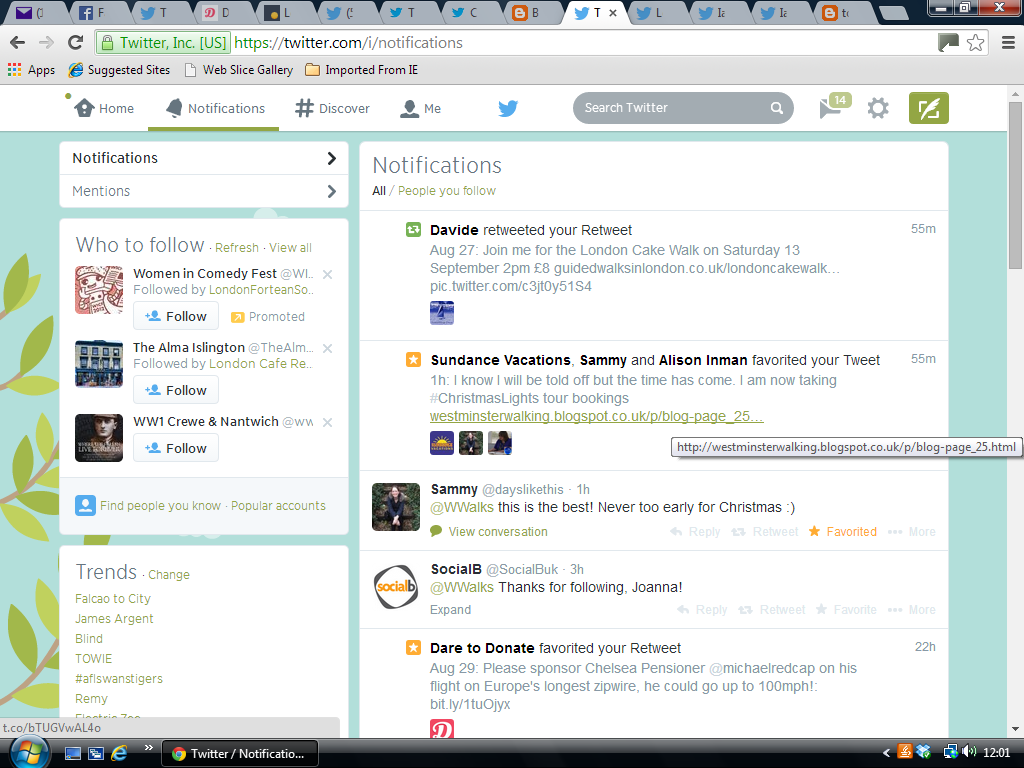 Who to Follow
As you start following people they will in most cases follow you back. However don’t automatically follow everyone that follows you. Check out their tweets first – are you interested in what they have to say or could they be useful to you. It’s also worth checking when they last tweeted – anything more than a few months ago means their account is probably dormant.

I started off by following lots of museums, London themed websites such as Ian Visits,  Londonist and London Historians, hotels, London enthusiasts and also fellow Westminster Guides. As my walks are mainly food and drink themed I also follow lots of cafes, cocktail bars and restaurants. Since Summer 2013 I have been doing local walks too so now follow lots of Walthamstow and Chingford based businesses.

People use Twitter in different ways. I dip in and out, others try to read every single tweet in their timeline. This is impossible. Yes I do follow over 2000 accounts but I have managed somehow not to get addicted to constantly reading my timeline.
Hashtags
Have you ever seen adverts with a “#” in front of a phrase and wondered what it meant. Well, this is a hashtag and is a way of categorising tweets. If you are attending a talk or conference there is likely to be a specific hashtag so all tweets about the event that include that hashtag will be grouped together. I now can’t watch TV without following comments about that programme on Twitter at the same time!  More info on hash tags is here.
The one that you will see the most is #FF – this means “Follow Friday” and the Twitter user will list a number of Twitter accounts he/she is recommending.

An automatically generated email is sent to Twitter users each week which usefully lists your best performing tweets. It is sometimes surprising what is the most popular and therefore helps improve your output. 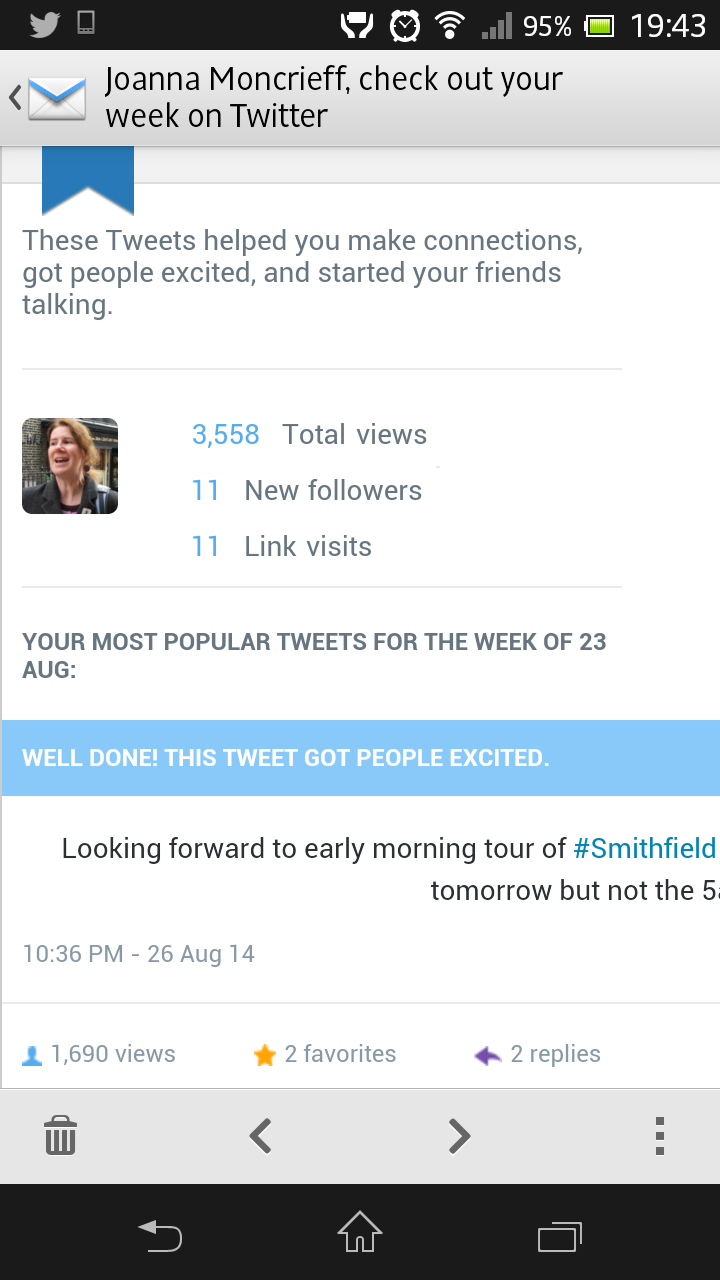 This morning via Twitter I discovered an even more useful tool where from the moment you sign up your tweets are analysed.  Details are here.

This tool only works for tweets written after you sign up to the service which is why my statistics are so low at the moment. 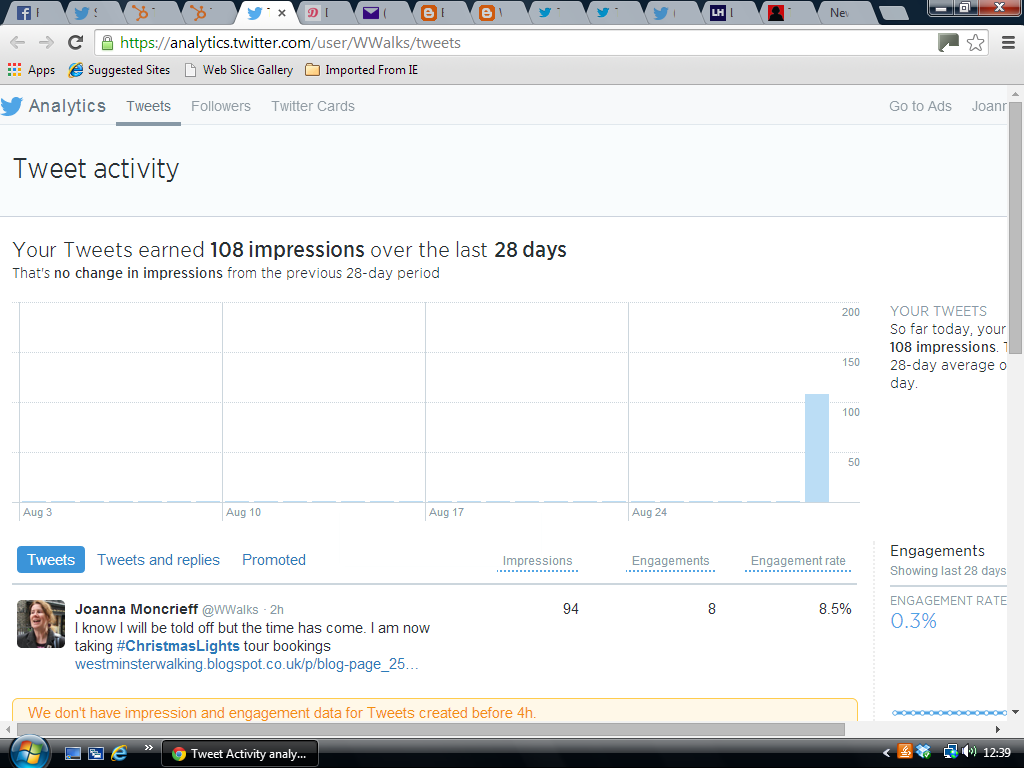 There is also a separate page where you can analyse your followers ie where they come from and who they follow ie 82% of my followers are from the UK and 30% follow @LondonHistorian (a very worthwhile organisation to follow and to join –  but I digress). 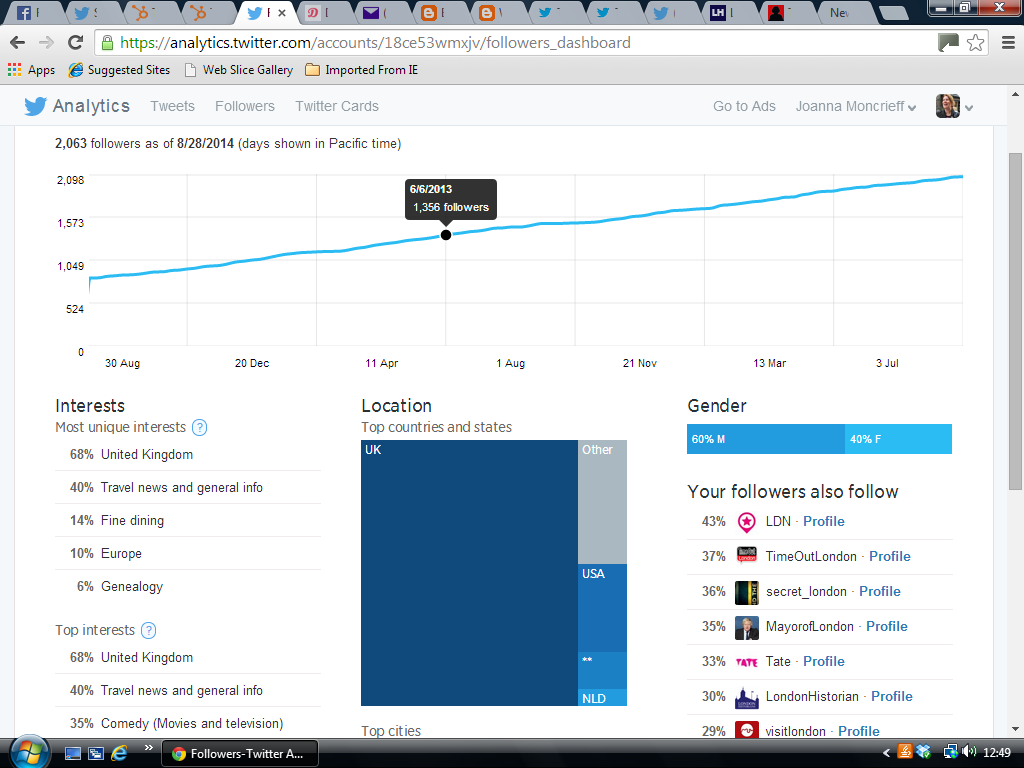 Do share other people’s tweets by re-tweeting.
Do send thank you tweets to organisations but on the other hand don’t send thank yous when people follow you. If you’ve enjoyed the theatre, a walk or an event of some kind (even if not related to your business) send the organisation a tweet (although make sure you don’t start your tweet off with their ID* ) and you will find that in 9 cases out of 10 they will re-tweet your tweet to their followers which should hopefully give you wider exposure. You can then do the same if you receive similar tweets!  I once tweeted about a production at Wilton’s Music Hall remarking that the actor looked like Colin Firth in Pride and Prejudice. The actor (unfortunately not Colin Firth) re-tweeted it and thus brought more people to me.
*You need at least one character (even just a dot) before “@[name] otherwise your tweets will only get a very limited audience.
Do Favourite other people’s tweets. This is like a bookmark which you can come back to. People looking at your profile can also see your favourites so know more about you.
Do tweet at varying times of the day about an upcoming walk/event but don’t repeat too many times which is boring for your followers.
Don’t just promote yourself. This is boring for your followers and they are likely to unfollow you.
Don’t send a series of the same tweet to lots of individual organisations. Your other followers will see this same message over and over again and are likely to unfollow you. I see this mistake time and time again. It is extremely annoying for your followers and those that you are targeting are likely to ignore you as you are spamming them anyway!
Don’t say thank you individually to all your followers for following you. This has actually put me off following people as the majority of their tweets are acknowledgments for following them!

Don’t just re-tweet other people’s tweets. Give yourself a voice, have something to say. I personally am unlikely to follow people who don’t have their own identity.
Protected or not protected
Twitter is a public forum. Anything you tweet can be found by anyone whether or not they are on Twitter themselves. If you are not keen on this you can make your tweets protected. This would mean that only your followers (who have all in this case been individually approved by yourself) would see your tweets. To my mind this defeats the object of Twitter which is to gain a large audience in a short time. However if you do want to find out more about protecting your tweets details are here.
As a result of my original post back in August 2012 a Westminster Guide @GWinLondon joined Twitter and  is now a prolific tweeter with more than double the amount of followers I have!

Good luck and if you have any tips to add please put them in the comments below.