Discovering Clerkenwell and Islington via its Guiding Course

Since qualifying as a Westminster Guide I have become more interested in the history of wherever I go and I imagine this is true of other guides. There is still so much of London to explore! About a year ago I joined Footprints of London and have been amazed by the diversity of the walks on offer – walks alongside hidden rivers such as the Moselle (in Haringey) or walks following the Charles Booth Poverty Maps for example.

As with many of my Westminster Guiding colleagues my clients are mostly Londoners or people who have visited London many times before and want to discover places away from the usual tourist sites. With this in mind last summer I applied for the Clerkenwell and Islington guiding course. The course finished in May this year and I have just qualified – a pass with distinction no less! I will receive my badge from the Mayor of Islington this coming Thursday alongside my course colleagues – we all passed.

The course runs over an academic year from September to the following May and involves a lot of hard work and study but at the same time it is very rewarding to learn about the history of areas such as Pentonville, Barnsbury, Canonbury and Highbury. Practice “walk shops” take place on alternate Saturdays where each student tells the rest of the group about the particular place (or places) they have been asked to research. Everyone then circulates their notes so you then have a ready-made walk or the basis for a walk.

My Westminster walks are generally food and drink themed but so many different opportunities present themselves in Clerkenwell and Islington. My project walk for the course was themed on liquid refreshment around Clerkenwell (water, gin and beer) but the former pleasure gardens and entertainment venues of Islington, the interesting mix of architecture, the medical health of the area and even the sporting venues give lots of scope for different walks.

I’m not a football fan but for our practice walk around Highbury several of us had to put together a stop on Arsenal’s old and new stadiums from the vantage point at the top of the hill where you can see both. I discovered a fascinating history – mostly dictated to me by a fellow Westminster Guide who is an Arsenal fan – in fact he gave me far too much information! I had planned to talk about the history of the club, for example their move from south of the Thames to north, the basis and history of the animosity between Arsenal and Tottenham, how the tube station ended up being renamed and the catalyst for the move to the Emirates stadium; in fact I wouldn’t have mentioned football once. Unfortunately however the stop was given to someone else!

Whilst researching Moorfields Eye Hospital in the St Luke’s area I became rather obsessed with the name of the street – Peerless Street – and the fact that it commemorates the Peerless Pool which had formerly been the Perilous Pond! 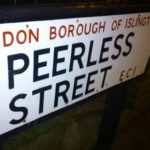 I could go on about the fascinating history and places I discovered whilst studying on this course but instead will just post a couple of photos to tempt you. 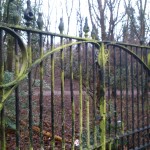 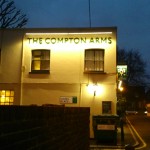 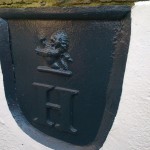 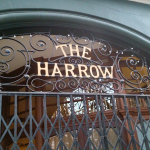 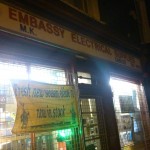 As mentioned above the course was quite hard work but as I had already been guiding for 6 years I didn’t have to worry so much about guiding techniques although of course it was good to have some refresher training to get rid of bad habits I had acquired!

Apart from the project mentioned above students also have to take two practical guiding exams – one in St John’s Gate and one on the streets of Islington – plus a written exam under university exam conditions.

St John’s Gate which was the venue for our internal exam had been on my “to visit” list for years – I had never quite found the time to fit it in. However having now studied the place in depth and visited on numerous occasions I would say don’t delay and visit it whenever you are able. Guided tours generally take place on Tuesdays, Fridays and Saturdays but during July, August and September tours are additionally taking place on Sundays. Hopefully I will soon be on the tour rota myself. Details of tours can be found on their website.

The Clerkenwell and Islington guiding course takes place at the University of Westminster at their campus opposite Madame Tussaud’s and whilst you’re a student there you can use their amazing library which is open 24 hours a day! Admittedly as the university is in Westminster the Westminster selection was slightly better than the Islington offering but they have reference books such as Pinks’ History of Clerkenwell which is prohibitively expensive to buy as it is now out of print. If however you are looking to buy secondhand books I would recommend contacting Hawk Norton who is selling his personal collection of London history books. I bought a rather “distressed” copy of Pinks (it was in two physical halves) for a fraction of the usual cost. Londonist recently featured an article about Hawk’s collection and it is worth emailing him to get an up-to-date catalogue before you make an appointment to visit. On my one visit there (so far) I bought as many books as I could carry and spent £100!

Clerkenwell and Islington certainly has so much to offer in terms of potential for walks off the beaten track and I am so looking forward to sharing what I have learned with my clients.

I hope I have whetted your appetite and you now want to apply for this course. On qualifying you will be awarded a Diploma of Special Study in Tour Guiding (Clerkenwell and Islington) and once you have joined the Clerkenwell and Islington Guiding Association you will receive the aforementioned badge and will be covered by public liability insurance.

The question now is will I do another course? If I do it is likely to be the newish Camden course but I don’t believe in doing two in a row and will leave it a couple of years so I have had time to consolidate what I have learned and start guiding in Clerkenwell and Islington.

Update December 2016: Apply now to join the Clerkenwell & Islington Guiding course at the University of Westminster. The new course starts in January 2017. More details and how to apply can be found here

Details of all her walks are listed here