Having lived for most of my life in the Chingford and Walthamstow areas I know this locality pretty well and now have a fairly good knowledge of the West End, the City and Clerkenwell & Islington. However it is the bit in between my local area and the centre of London that I am less familiar with.

There must be many people like me who want to discover London off the beaten track and various Footprints guiding colleagues have taken this on board and are offering walks as diverse as The Industrial History of Dagenham Dock with Rob, a Walk through Canning Town with Sue and Jen Pedler’s Moselle Mosey. I myself lead walks in both Chingford and Walthamstow.

It was Jen’s aforementioned Moselle Mosey that I did yesterday. Until the Footprints River Festival earlier this year when Jen launched this walk I had never heard of this London river and I do wonder how many of the residents of the various roads named after this river ie Moselle Place N17, Moselle Street N17 and Moselle Avenue N22 (amongst others), know the history behind these street names.  Our walk from the source of the river in Queens Wood Highgate to where it flows into the Lea near Tottenham Hale passed through a fascinating cross-section of London where we searched for references to or views of the river.

The walk was full of interest and surprises – for me the biggest surprise was discovering a side to Tottenham I had no idea existed.

The first surprise was the church. All Hallows Tottenham and its picturesque churchyard. There has been a church on this site since the 12th century. More details about the history of the church can be found here but look at my pictures of the amazing decoration on each side of the door. 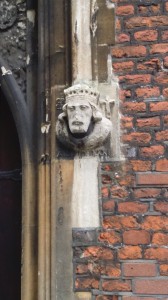 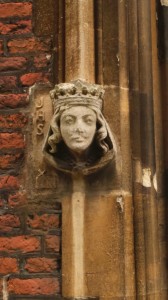 From the churchyard we then came upon Tottenham Cemetery which had much of interest. First of all there was a tunnel that linked the two sides of the cemetery – the original path to the church predated the cemetery so a tunnel was built under it. Unfortunately the photo is somewhat spoiled by a man who appeared to be changing his clothes! 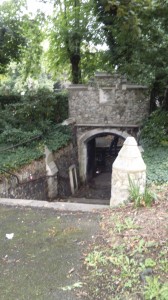 Several of us were waylaid by a number of interesting memorials. I myself spotted a  reference to a “Moncreiff” (on the Chapman grave) and although spelled slightly differently I still had to take a picture. The middle picture is of someone with an unfortunate surname – Nutter – and the one on the right was just because I liked the horse. 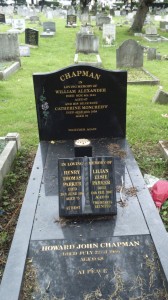 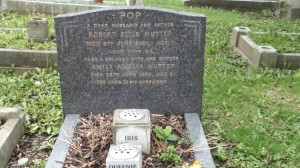 The next surprise was the river – the River Moselle runs through the cemetery. Is this unique? Does anyone know of any other cemetery in the country that has a river running through it? 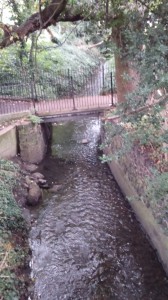 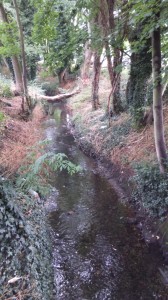 A few minutes later and still within the cemetery we came across a lake which apart from the rather bizarre sign and the rather aggressive geese (not photographed) was quite tranquil. 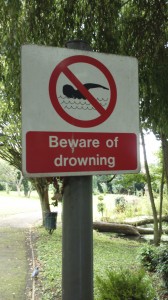 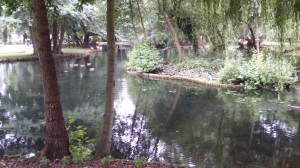 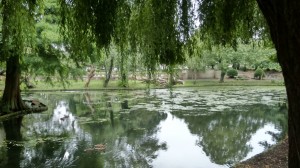 Tottenham Cemetery and All Hallows Church were just a small part of this fascinating walk.  I never thought I would say it but I now want to return to Tottenham to explore the cemetery in more detail, visit the church and also call in at the Bruce Castle Museum which is close to the cemetery and which coincidentally has just been reviewed by the Ladies Who Bus.

Update May 2016 – Jen is again leading the Moselle Mosey on Sunday 29th May 2016. More details and how to book are here

The author of this blog (Joanna Moncrieff) is a qualified City of Westminster and  Clerkenwell and Islington Tour Guide.

Details of all her walks are listed here