Epping Forest and a Tale of Two Houses

Having spent Open House Saturday leading two ninety minute walks around Secret Victoria I decided to concentrate my Open House visits locally today. I visited two very different sites but each with something in common – their former grounds are now part of Epping Forest.

Although only about 4 miles from where I live in Chingford, I am ashamed to say I have barely visited Wanstead. In my defence it is a little awkward to get to by public transport either involving a train and a long walk, two buses or in my case today a bus, a tube and a 10 minute walk.

Wanstead House – if only it still existed, if only Catherine Tylney-Long hadn’t married a spendthrift …

Today as part of Open House weekend I discovered what was left of Wanstead House’s park on an excellent walk organised by the Corporation of London in their role as custodians for Epping Forest.

If the house hadn’t been demolished because of the family’s debts it would certainly have put Wanstead on the map today as a tourist destination being a significant Palladian house whose history connected it to many significant people.

The clues to the house’s whereabouts are in some places obvious, in others less so, so the walk was an excellent introduction to its history.

The grounds of the house are still evident in part – three sweet chestnut trees planted in 1720 were the first evidence we saw of the former grounds of the house. These three trees can be seen on George Green opposite a building confusingly named Wanstead House formerly known as West Ham Hall as the previous owner came from West Ham. 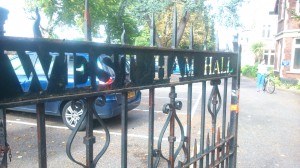 Part of the former grounds to the original Wanstead House and the actual site of the house are now within Wanstead Golf Club and not accessible to the public. However from the atmospheric graveyard within the St Mary the Virgin Church we could spot the dip in the land where the house used to stand; apparently every last brick was sold. 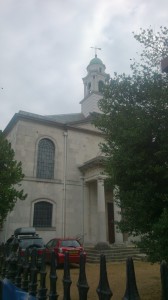 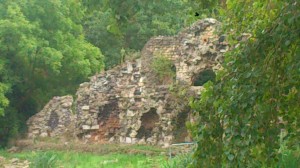 Our walk finished at the building known as The Temple. This contained a fascinating exhibition about its history which can be read here.

Just hearing about William’s obituary is enough to make you want to find out more about the fascinating history of the house and its occupants. Published on 2nd July 1857 in the Morning Chronicle it read:

“A spendthrift, a profilgate, and a gambler in his youth, he became debauched in his manhood … redeemed by no single virtue, adorned by no single grace, his life gone out even without a flicker of repentance.”

Last year my sister recommended a book to me “The Angel and the Cad” by Geraldine Roberts about the notorious spendthrift with the ridiculous name William-Pole-Tylney-Long-Wellesley and I am already a big fan of Geraldine’s husband’s blog Wicked William.

According to Wikipedia Pole-Tlyney-Long-Wellesley died in Thayer Street, Marylebone so if I can find the house he died in that will be enough reason for me to include his story on a future Marylebone walk.  There is already a tenuous link to him on my Chingford walk.

Later today I visited another house whose former grounds are also part of Epping Forest. Woodford County High School for Girls was formerly known as Highams, and its grounds were landscaped by Humphry Repton. The school still has quite extensive grounds but Repton’s landscaping included what is now Highams Park Lake which is today accessible to all.

It was so good to see inside a building which I had glimpsed from afar whilst going past on the 179.

Although the school did seem small for the number of pupils and staff it was fascinating to see evidence of its former lives both as a house – at one time owned by Courtenay Warner responsible for much house building in Walthamstow – and also as a Red Cross hospital during the First World War.

Our tour led by enthusiastic Year 12 pupils took us all over the school. We all loved the library which was the former master bedroom, and the Greek Theatre. 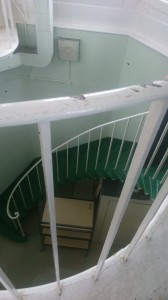 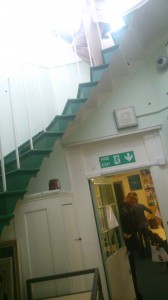 It just shows you that there is so much to see in London even on your own doorstep.

The author of this blog (Joanna Moncrieff) is both a City of Westminster and  Clerkenwell and Islington Tour Guide.