9 non-touristy reasons why you should visit Leicester Square

Shock horror – yes, I am really suggesting that you should visit Leicester Square as on the periphery of the square can be found some amazingly cheap places to go for food, for entertainment but also for peace and tranquility.

Although the China Exchange is within an enormous building that straddles both Lisle Street and Gerrard Street it is very easy to walk past its entrance in Gerrard Street because of the plethora of things going on around it.

Opened in 2015 the China Exchange is a charitable organisation which promotes itself as “A dynamic forum of intelligent exchanges with extraordinary people”. These “intelligent exchanges” generally take the form of “60 minutes with …” a series of talks with extremely famous people for around £10 a time.

Chaired by Sir David Tang about a third of the evening consists of questions from Sir David. For the other two-thirds the audience is invited to question the guest. I discovered this venue last year and attended 60 Minutes with Sir Michael Caine, Lord Lloyd Webber and Darcey Bussell. On each occasion I have found the guests to be charming and open. I could have attended a lot more but only discovered the series three-quarters of the way in. In the next few weeks I’m booked to see Richard E Grant on 12th June and Jimmy Carr on the 19th and am currently thinking of booking a few more. See the list of upcoming events and those that have gone before here.

You may wonder what the connection with China is and I do often wonder that myself; however they do have other events which are more Chinese themed such as a recent play/meal which was excellent. From Shore to Shore is now touring the country and I would definitely recommend seeing it if you can. The price includes a two course meal. 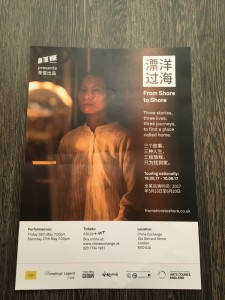 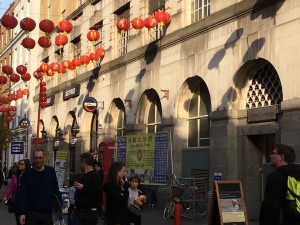 Tucked away next to (at the moment) an enormous hole in the ground close to the back of the National Gallery in Orange Street can be found Westminster Arts Reference Library. This is a great venue in its own right with its fantastic collection of books on the arts and other subjects, some of which you can borrow. Like many of London’s libraries there is a programme of events; however the ones at this library are a bit different from the norm. 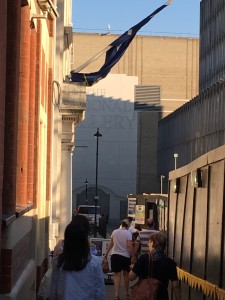 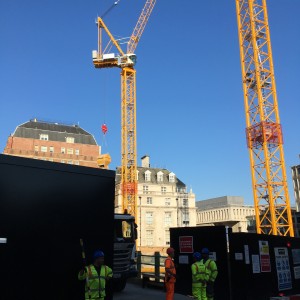 Coming up on 19th June is a talk about Art Nouveau jewellery from Liberty with archivist Alison Kenney followed by a make your own jewellery workshop. The entire event costs just £6 which includes materials!  Other upcoming events at this library include an author talk about a talking mongoose and a talk about the Damned!

If you scroll down on Westminster Library’s events page you will see at the bottom reference to Salon for the City. I have to say I thought long and hard whether I want to share this monthly event as it always sells out so I don’t want it to get to the point that I can’t get in! There have been 46 Salons for the City so far. The subject is always London with a sub-theme such as crime, musicals, myths, news, punk etc. The price which includes talks from two speakers and two Hendricks gin cocktails is under £10.  The next one is a Soundtrack for the City and takes place on 29th June. I’m double-booked unfortunately.

Lastly look out for the library’s Forgotten Gaiety Musical events which are organised by the George Edwardes Musical Society. These events comprise a read through and sing-along with audience participation.

Back to Chinatown again and to a dodgy looking alleyway linking Macclesfield Street to Wardour Street. Dansey Place looks uninviting and a place to avoid but you would be wrong to do that. Walking from Macclesfield Street towards Wardour Street you will first of all pass a tiny grocery on your right and then on your left Young Cheng’s seafood shop with live lobsters and crabs swimming in a tank in front of you. But the place you really should be visiting is Mr Lo’s Noodle Factory. There is a sign but, look at the photos below, why would you venture inside? However this small factory supplies 95% of the Chinese restaurants in the area plus Michelin starred restaurants such as Hakkasan. The factory is also open to the public. My request for one bag of noodles was met with surprise that I just wanted one. However this bag of fresh warm noodles was enough to feed two generously. The cost is just £1. Once you taste noodles like these you really can’t go back to dried ones. They sell buns too but I’ve yet to try them. More about Lo’s Noodle Factory and the delights of Dansey Place can be found here los-noodle-factory 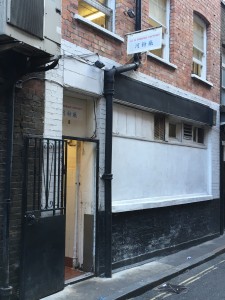 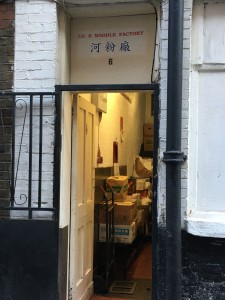 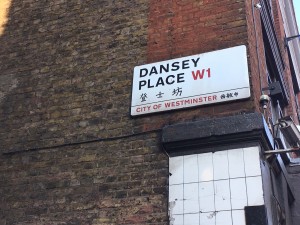 If you were to continue walking along Dansey Place towards Wardour Street you would see in front of you the healthy fast food restaurant Leon. Now this Leon is very different from the others. All the staff who prepare and serve the food here are also professional singers wanting to get noticed and follow their dreams. Every day from midday to close, in between preparing and serving the food, they take it in turns to sing show tunes to their customers. Leon West End is on Shaftesbury Avenue, famous world over for its theatres and many musicals so it was decided by Leon to do something a bit different.  I did wonder whether the customers would be appreciative but each time I’ve been in the singers have received rounds of applause – it is a wonderful idea.  http://leonrestaurants.co.uk/restaurants/westend/ 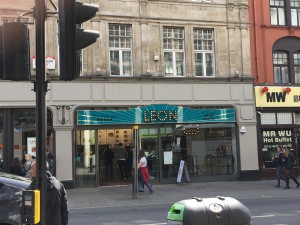 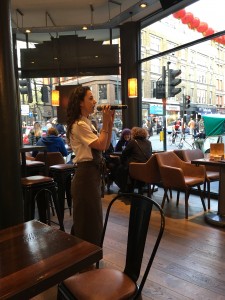 Now back to Wardour Street and close to the enormous W Hotel in between all the Chinese restaurants can be found Misato. Misato serves cheap but plentiful portions of Japanese food. It’s not a place to while away an evening and you are rather crammed together but it is definitely worth the queue which is constantly outside. I have just learned from this website that the restaurant has been there 25 years!

If you then walk back along Lisle Street and take the second turning on the right you are in Leicester Place. Here you will find three more places worth visiting.

The Prince Charles Cinema on the corner of Lisle Street is an independent repertory cinema. It has two screens – one showing the latest releases, the other showing older films. The tickets are very reasonably priced anyway but if you sign up as a member (£10 for 1 year or £50 for life) you are entitled to at least £2.50 off tickets, money off food and drink and a weekly £1 screening.  Yes, that is not a typo – £1.

They also host regular Sing-a-long-a events. As you would expect shows include the Rocky Horror Picture Show and the Sound of Music but also include Grease, Moulin Rouge, Beauty and the Beast and Frozen. One of the Frozen shows is adults only!

Another thing the cinema is famous for is their Movie Marathons – themed films running back to back overnight. A recent Harry Potter marathon lasted 21 hours!  Do you like James Bond? Well on 29th July from 8.30pm until 10.30am the next day they are showing 6 James Bond films featuring six different Bonds back to back (about 15 mins gap between each one). The price is just £20 for non-members. If you are a Harry Potter fan and are free from 8.30pm on Sunday 27th August until 5.25pm on Bank Holiday Monday the 28th August book your place now. Tickets for this one are £32.50. 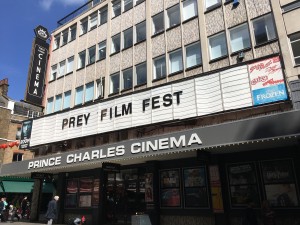 The Leicester Square Theatre sits right next door to the cinema. Known by this name since 2008 it was previously The Venue but has also been a music venue and a French cultural centre with connections to the church next door!  Today there are shows – theatre, music, comedy and cabaret in both the main auditorium and the lounge. Tickets start from just £10. The Museum of Comedy shows are even cheaper but it’s at a different venue – underneath St George’s Church, Bloomsbury. 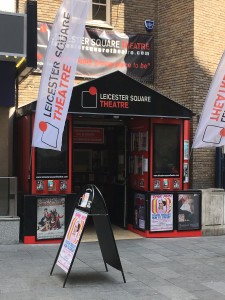 To the right of the theatre can be found Notre Dame de France, the tranquil place I mentioned at the top of this post. As you walk in the door you can hear classical music playing which makes you forget you are in such a busy area.  This Catholic Church is one of two French churches in the area; the other being the French Protestant Church in Soho Square. 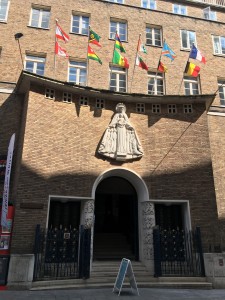 Lastly, and not really hidden but known to all is the Society of London Theatres Half-Price Tickets Booth. Now known as TKTs it is on the same side of Leicester Square as the reference library mentioned above. I’m sure most Londoners know that this is the official booth, do not be persuaded by imitators. If you would like to learn more about Theatreland and its history the Westminster Guides have recently started leading weekly walks from the TKTS booth. More details here. 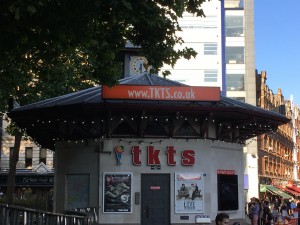 Is there somewhere in this area that I have missed? Please comment below.

If you want to explore this area more I will be leading my Soho Foodie & Bar Themed History Walk on Saturday 19th August at 4pm. This walk starts in Chinatown.  Booking details of this and all my upcoming public walks can be found here

The author of this blog (Joanna Moncrieff) is both a City of Westminster and  Clerkenwell and Islington Tour Guide. Details of all walks bookable by groups are listed here