Why I slept out for Centrepoint

Last Thursday night I took part in the charity Centrepoint’s Sleep Out London in order to raise money and awareness of their work with young homeless people. We were in no way trying to replicate a homeless person’s experience but the event was more to draw attention to the raft of problems the young homeless face and to raise much needed funds.

I was part of  the 9 strong Team SM&B the Soho law firm where I work part-time.  Centrepoint is their charity of the year. 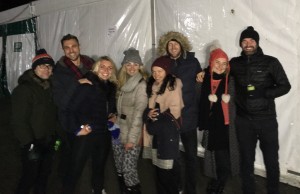 Somehow I missed the team photo!

We were lucky during the early evening as it wasn’t particularly cold and we were able to enjoy the entertainment, bar and food without much problem. View of the O2 from the Sleep Out site 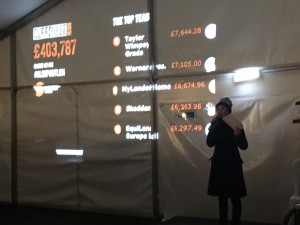 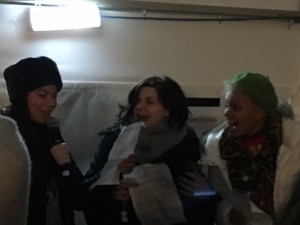 However the temperature dropped rapidly overnight and it became a very different story. 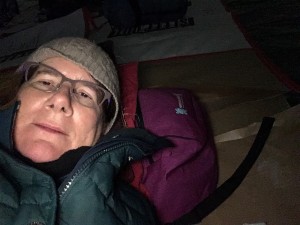 We were relatively comfortable in big marquees protected from the weather. We had portaloos nearby and urns providing hot drinks all night should we need warming up. However sleeping in a sleeping bag with just a cardboard layer below was an extremely uncomfortable experience. Earplugs helped to block out some of the noise from my sleeping neighbours but a randomly aching leg kept me awake for much of the night. I’m at that age where random aches and pains manifest themselves now and again but they have never interfered with my sleep to the extent they did that night.

We were woken at 5.30, packed up our stuff and made our way to the catering tent to pick up a breakfast roll.  The previous night’s dinner, the hot drinks and breakfast were all supplied by RAF Wittering. A very big thank you to them.

My original plan had been to go straight to work armed with wet wipes and a toothbrush but we had been woken earlier than I had anticipated and I realised that there was enough time to go home and have a shower and still get to work just about on time.

On entering North Greenwich tube the first thing we noticed was the warmth of the station. That warmth was so welcoming. At work later I struggled a bit on my limited sleep but knew I could catch up my sleep at home that night.

On Saturday I was waiting for a train at Liverpool Street station. It was freezing. Again it dawned on me that I was lucky and would soon be in the warm at home.

Before I volunteered for this I didn’t know much about the young homeless. Many of these young people have been forced out of their family homes because of abuse and a life on the streets or riding around on buses was preferable. Having spent one night out even with the facilities that we had it did give a small insight into life on the streets. I normally wear gas permeable contact lenses but realised it would be impossible to do my cleaning routine so wore glasses instead. What do the homeless do? They can’t wash, they can’t brush their teeth. They don’t have toilet facilities overnight. How do women cope when on their period? I felt ashamed that I had never considered any of these points before.

Centrepoint aim to help get young homeless people back on their feet. It’s not just about getting them into accommodation but also to improving their lives so they can get themselves into training or employment.

I am very pleased to have raised almost £500 for Centrepoint’s work with the young homeless and our team in total raised over £6,200. I’m not sure I will repeat this experience but it’s not too late to donate joanna-2

The author of this blog (Joanna Moncrieff) leads walks in the West End, Islington and further afield. Details of all walks bookable by groups are listed here