What a treasure trove the British Newspaper Archive is!

I have just searched my maternal grandfather’s name (Henry Fotheringham Ferguson) and discovered the Dundee Evening Telegraph’s report of my aunt’s wedding in August 1945. Aunty Joan was an actress (using the stage name Joanna Derrill) and this does read a bit like a celebrity report with details of what both my aunt and her bridesmaid (my Mum to be) were wearing.
“The wedding of Miss Joanna Derrill and Mr Antony Groser – two members of Dundee Repertory Company – took place in Edinburgh to-day.
The bride, whose own name is Miss Joan Ferguson, is the elder daughter of Dr and Mrs Henry Fotheringham Ferguson, 21 Inverleith Row, Edinburgh, and the bridegroom is the younger son of Rev. St John Beverley Groser, St George’s-in-the-East, London E1, and of Mrs Groser.
Ceremony, which was in St John’s Episcopal Church, was conducted by the bridegroom’s father, assisted by the rector of the church, Rev. S Harvie Clark.
A beautiful Elizabethan gown of white moire silk taffeta was worn by the bride, whose father gave her away. The full skirt swept into a small train over which rippled her veil, surmounted by a wreath of orange blossom. Deep red roses composed her bouquet.
Miss Margaret Ferguson, sister of the bride, was bridesmaid. Her graceful gown of silver and pale blue brocaded satin was cut on princess lines and showed large puff sleeves. Her pastel tinted hair wreath toned with the sweet peas in her Victorian posy.
Mr Michael Groser, brother of the groom, was best man, and the ushers were Dr Kinnier Ferguson (uncle of the bride), and Mr George Beith (cousin of the bride).
The reception was in the bride’s home.
For travelling the bride donned a lightweight grey tweed suit striped with yellow with toning accessories.”

This one newspaper report also answered a question that had bugged me a few years back.  On a London Historians’ tour of the Royal Foundation of St Katharine in E14 a few years ago I noticed the name “Groser” on a list of names on the wall. I remember wondering if this was a relation to my Uncle Tony married to Mum’s sister Joan. The Dundee newspaper article gives my uncle’s father’s name and on a quick internet search I have discovered that St John Beverley Groser was described both as “the best-known priest in the East End [of London]” and “one of the most significant Christian socialist figures in twentieth-century Britain”. He also had a separate career as an actor and played Thomas Becket in the 1951 film Murder in the Cathedral.
As far as I know I never met Uncle Tony’s father and he died in March 1966 when I wasn’t even 4 years old.

My aunt’s connection to Agatha Christie

Sadly it was only after my Mum’s death in 2016 that I discovered that her sister had a stage name – Joanna Derrill. Mum had talked about Joan meeting Agatha Christie and once I knew her stage name I found more information. Agatha Christie attended the premiere of Hidden Horizons at the Dundee Repertory Theatre in 1944. When it arrived at the Ambassadors Theatre in London it then became Murder on the Nile. Aunty Joan (Joanna Derrill) performed in both the Dundee and London productions. The Ambassadors later became the first home of the Mousetrap until it moved in the 1970s around the corner to St Martin’s Theatre. 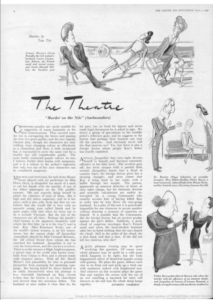 Tatler 3rd April 1946. Review of Murder on the Nile at the Ambassadors.

The author of this blog (Joanna Moncrieff) leads walks in the West End, Islington and further afield.
Details of all walks bookable by groups are listed here

One Response to Family history gems from the British Newspaper Archive