The Fascinating History of Twinings Tea

Have you ever noticed that the sign hanging outside Twinings’ shop on the Strand shows that it sells coffee as well as tea? 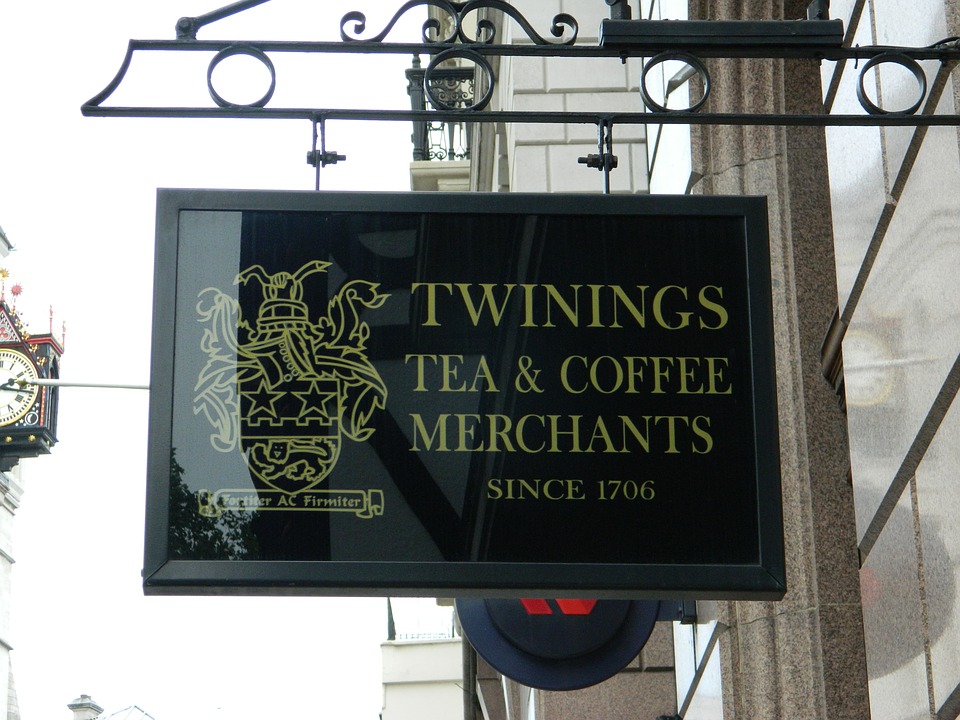 In fact Twinings started off as a coffee house and if it wasn’t for a recession in weaving in Gloucestershire the business may not have been established at all.

Thomas Twining founder of the business was born in Painswick, Gloucestershire in 1675. His father Daniel was a weaver; in fact for many generations the Twining family had been weavers in that same area.  The family had been based in Painswick for many hundreds of years. Before that they came from Twyning near Tewkesbury (pronounced Twinning).

Daniel obviously wanted his sons to follow him into this business but the recession hit and in 1684 he made the decision to move to London. The family settled in St Giles Cripplegate.

Thomas had started his apprenticeship at age 19 which may seem rather old. It is thought that this was to enable him to become a freeman as without such an attribute he would be unable to follow any trade within the City walls.

In 1701 Thomas attained this and started working for Thomas D’Aeth a wealthy East Indian merchant based in Cripplegate and Philpot Lane.

5 years later he had acquired enough business knowledge to set up by himself and took over management of Tom’s Coffee House situated in Devereux Court off the Strand roughly behind where Twinings is today. This was a good move as after the Great Fire of London in 1666 all the wealthy people were moving west. This coffee house was on the western border of the City. It should not be confused with another Tom’s Coffee House which was in Russell Street, Covent Garden not that far away.

At that time there were many coffee houses in London but Thomas did something a bit different. He introduced tea. From gaining knowledge whilst working with an East Indian merchant he had a feeling that tea was going to be the next big thing. It was very expensive and although the price was dropping slowly as the imported volume increased it wouldn’t drop substantially until the Commutation Act of 1784 when the tax was substantially reduced from over 100% to 25%. Until that time legally obtained tea was for the rich only and poorer people acquired it on the black market. After the taxes were reduced which came about after many conversations between the Prime Minister William Pitt and one of Thomas’ descendants Richard, the smuggling trade ceased and the legal trading of tea increased exponentially. 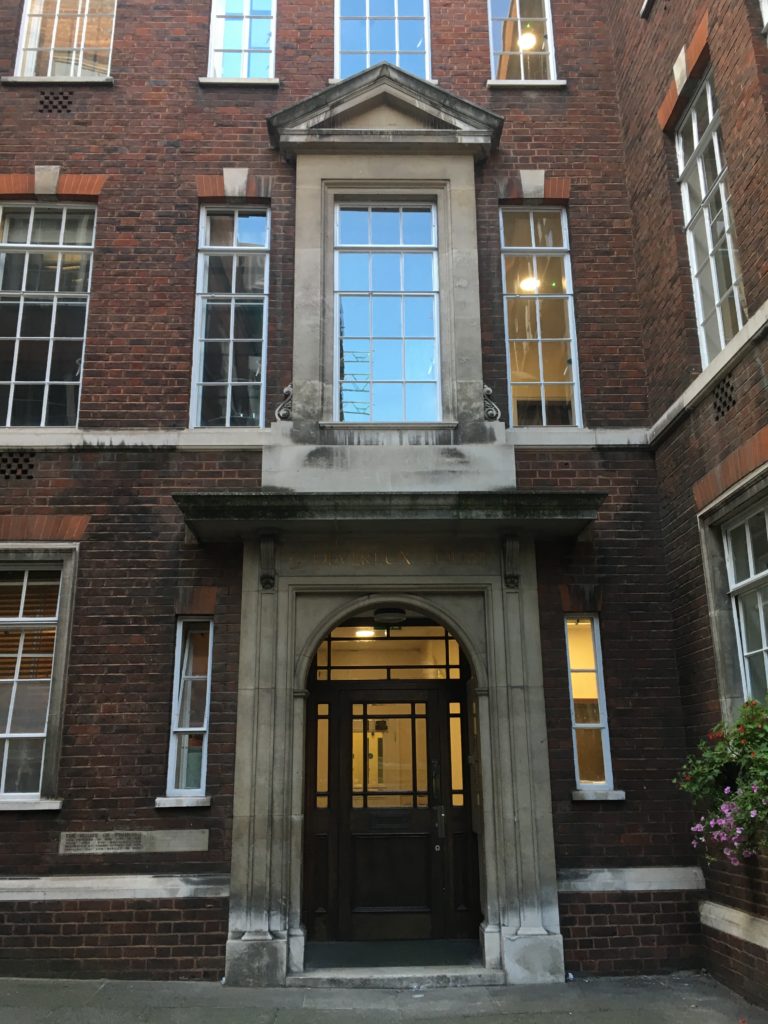 Back to Thomas in 1706. There were enough rich people around when Thomas started selling tea and so he made enough money to open a shop next door to the coffee house with entrances from Devereux Court and Palsgrave Head Court which was parallel. Thomas had put his money into property which seemed the safest way to invest.

This new shop at the sign of the Golden Lion opened in 1717 and meant that women who were prohibited from entering coffee houses were able to visit the shop either to take tea on the premises or to buy dry tea or coffee for consumption later. As tea was so expensive they generally wouldn’t want to trust their servants to buy it for them.

The undated wrapper below dates from between 1734 and 1741. The shop name changed depending on what members of the family were running it. Thomas’s son Daniel joined the firm in 1734 and Thomas died in 1741. Looking at the history of the Twining family it can get rather confusing as they did like to recycle the Christian names! 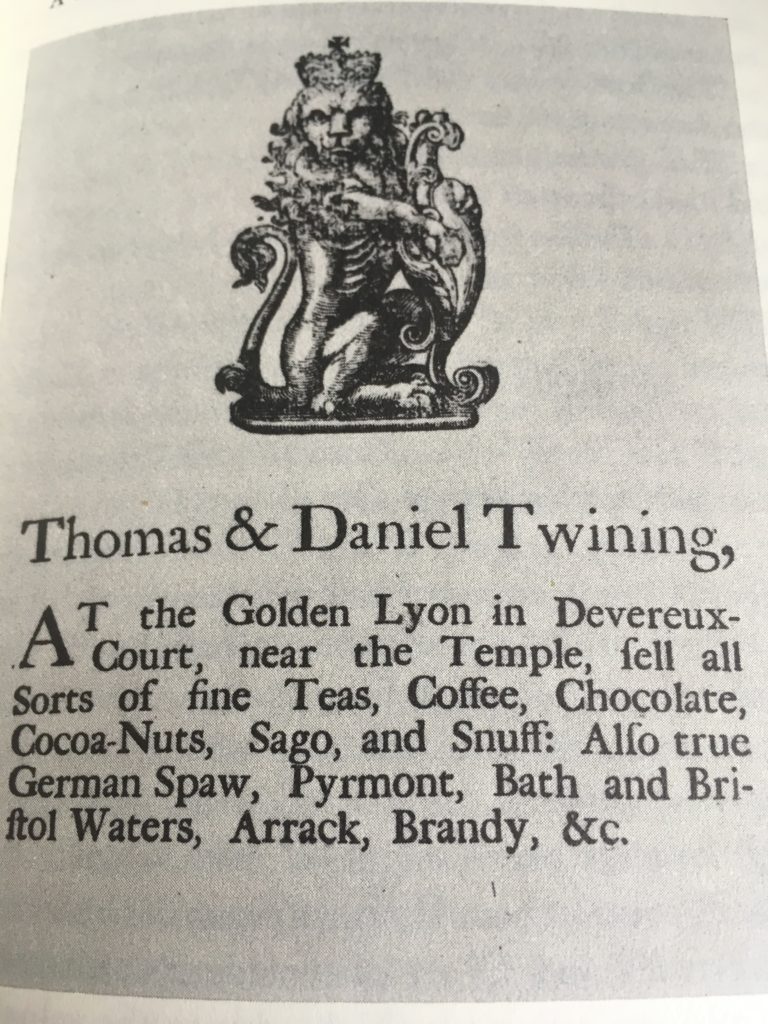 Looking at this wrapper they were covering all bases by selling ‘healthy’ spa waters and less healthy alcohol. The spa waters, which were sometimes described as spaw waters, came from many different places. Pyrmont water was from Bad Pyrmont in Northern Germany and was naturally carbonated.

Arrack was a popular drink in the 1700s often used as a base for punch and sometimes preferred to rum. Depending on where the Arrack came from it had different ingredients. Batavian Arrack is from Java and is distilled from sugarcane and fermented red rice. Arrack from Sri Lanka is made from fermented coconut sap. I was very surprised to discover that both these types are still available from good off licences such as Gerry’s in Old Compton Street Soho. I don’t think it’s as popular now as it was then as in the year 1715-16 Twinings sold 240 gallons!

Thomas’s grandson, also called Thomas (1735-1804), went to university and became a cleric, a linguist, a letter writer and a musician. Some of his letters were later edited into book form by one of his descendants.

The sisters’  great grandmother Mary Twining (née Little) married into the family and as a widow of the original Thomas’s son Daniel, ran the company by herself for 21 years from 1762 to 1783. I wanted to find out more about Mary and I know she wrote a diary but enquiries at Twinings’ shop came to nothing. The book where I gleaned much of my information ‘Two Hundred and Fifty Years of Tea and Coffee” published in 1956 has just one sentence about her. If anyone reading this can enlighten me as to where I can find out more about her life please let me know. 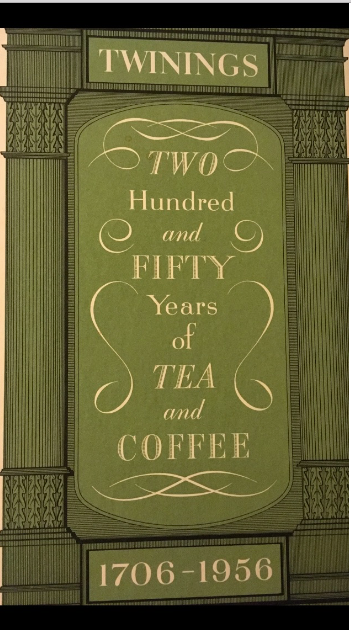 It was Mary’s son Richard Twining, called away from his studies at Eton age 14 to help his mother with the business, who later became Chairman of the London Tea Dealers and who was consulted by Pitt regarding proposals which led to the Commutation Act mentioned above.

It was also this Richard Twining who in 1787 moved the entrance from the side of the shop to the Strand where it is today and came up with the famous design featuring the lion and the two Chinamen which we all know. He also decided not to use an apostrophe. 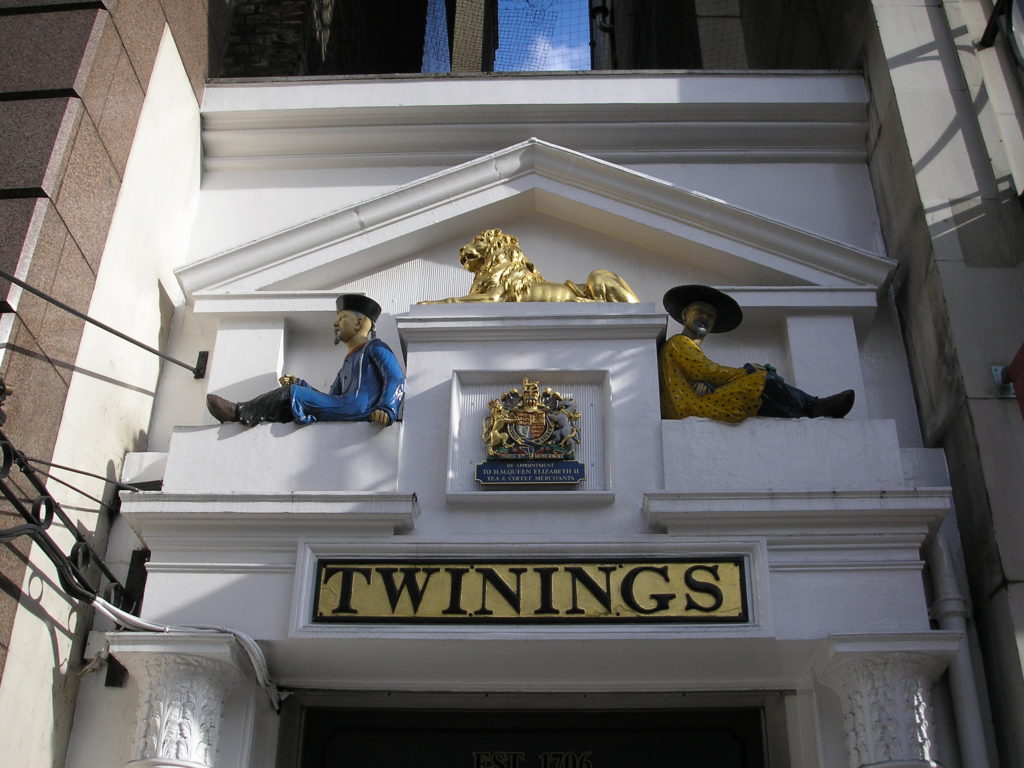 Reading extracts from some of the ledgers reproduced in the 1956 book it is no surprise to me that they branched into banking and in 1825 Twinings Bank opened next door. There was a connecting door between the businesses and it wasn’t unusual for a cheque to be cashed and part given in cash and part in tea or coffee. The bank lasted until 1892 when it was absorbed into Lloyd’s.

Today the shop is very much a tourist destination and although their teas can be bought in every supermarket the shop has a wider choice of teas which are mostly displayed in more decorative packaging. There is also a small museum at the rear of the shop. The 10th generation of the family still run the business but it has been part of Associated British Foods since the 1960s.

This is just a brief summary of the history of Twinings and was put together by me to deliver at London Historians’ retail themed History in the Pub on 21st August 2018. I had just 8 minutes to deliver and needless to say I didn’t manage to say all that I wanted to, hence this blog post.

The author of this blog (Joanna Moncrieff) leads walks in the West End, Islington and further afield.
Details of all walks bookable by groups are listed here

4 Responses to The Fascinating History of Twinings Tea