There is one building that really stands out on my Christmas Lights walk and for many of those on my walk not only is the look of the building a surprise to them but if we manage to get there at the right time they will be treated to a carillon recital too. This wonderfully decorated building on the corner of Burlington Gardens and Old Bond Street looks like it has been transported from Belgium or the Netherlands.

It was purpose built for J & E Atkinson perfumers in 1926 when their previous premises on the same site burned down. The business was founded in 1799 by James Atkinson in Cumberland and had moved south firstly to Gerrard Street Soho before settling in Burlington Gardens, Mayfair. Their speciality was rose scented bear grease balm which was a mixture of unmentionable ingredients and perfume and was used by bald men to supposedly make their hair grow. It was thought that as bears were hairy that this would in turn work on men! Their other specialities included a perfume made from the flowers in Queen Victoria’s wedding bouquet and the Oddfellow’s Bouquet being a favourite of Lawrence of Arabia. The shop was well known and in fact was included in Virginia Woolf’s novel Mrs Dalloway.

When their previous premises burned down Atkinsons decided to outshine their competitors with their new building. Their rivals were operating from ordinary, formerly residential buildings. Atkinson’s new home was built by architect Emanuel Vincent Harris most of whose other work is so different it’s hard to believe it’s the same architect. Emanuel Vincent Harris also built Manchester Central Library, Kensington Central Library and the Ministry of Defence, the latter being described by architectural historian Nikolaus Pevsner as a ‘monument of tiredness’! Pevsner is more complimentary about 24 Old Bond Street describing it as ‘a successful freak … the design is nice, and one gets used to it’.  The coloured panels were carved by Nathaniel Hitch after designs by George Kruger Grey. 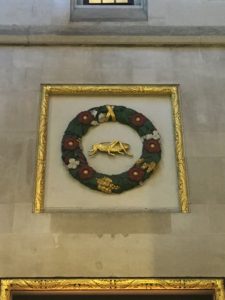 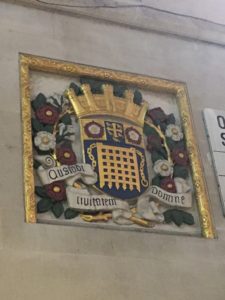 A carillon consists of a number of bells played via a console/keyboard. There are 15 carillons in the British Isles but only one in London. This instrument which is made up of 23 bells was built by Gillett and Johnston who are still in business today. Looking at the British Carillon Society’s website I’ve found this wonderful video showing exactly how a carillon is played. The carillon in this film is in St Colman’s Cathedral, Cobh, Co. Cork and consists of 49 bells the largest in the British Isles. As Adrian Gebruers, the carillonneur says the first requirement is to be able to climb a lot of stairs the Cobh one being a climb of 200!  This video of the carillon in Bournville shows it can be a bit of a workout to play too and shows the variety of pieces that can be performed. Here the carillonneur Trevor Workman is playing Abba’s Super Trouper. Lastly here is a wonderful film from British Pathé in 1948 showing Atkinson’s Carillon being played by the only woman carillonneur at the time.

Unfortunately the brand of Atkinsons practically disappeared after the Second World War and went through a number of owners. However the brand re-emerged in 2013 and now trades from Burlington Arcade a minute’s walk from the Old Bond Street site. They proudly claim they were founded in 1799 and again sell the Nuptial and Oddfellow’s Bouquet perfume but thankfully not the bear grease.

I have been leading my Christmas Lights walks for quite a few years now and it is always a wonderful surprise to find that the carillon is being played during my walk. It is so Christmassy!

Why not join me this Saturday 15th December 2018 when myself and fellow guide Ray Coggin will be leading a special charity Christmas Lights walk raising funds for the Taxi Charity for Military Veterans.

If all goes according to plan there will be a practice session on the carillon during Saturday’s walk – but believe me you wouldn’t realise it was not an actual recital. The walk takes in the best Christmas lights of the West End, the best shop window displays, the history of Christmas food, cards, trees etc and of course there will be a mince pie or two. All we’re asking is a minimum donation of £10 per person. We’ve raised £145 so far and have 10 people booked on the walk but there’s room for a few more. This is one of my favourite walks and having the carillon being played is definitely a bonus. Find out more about the walk and the charity and how to book your place here. 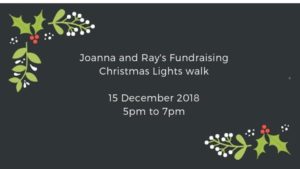 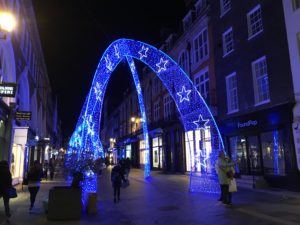 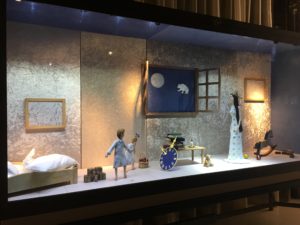 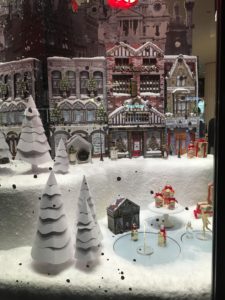 There will also be a carillon practice during my Foodie themed Christmas Lights walk on Tuesday 18th December. Details of this and all my other public walks can be found here.

From now until Christmas:

The author of this blog (Joanna Moncrieff) leads walks in the West End, Islington and further afield.
Details of all walks bookable by groups are listed here
Search