I have a dilemma. Last night at London Historians’ excellent History in the Pub where 8 speakers talk for 8 minutes each on a pre-determined theme I gave my talk on rat killing matches in London pubs.

This may appear to be a strange subject to talk about but as a London tour guide finding out the history of something that has been largely forgotten is what us tour guides love.

Back in 2012 I was contacted by the manager of the Queen’s Head pub in Denman Street, Soho. They had found a link to my website on Londonist – thanks Londonist! They were looking for a tour guide to do a circular walk from their pub finishing with Sunday lunch at the pub. The manager, Joe, who had taken over the pub the previous year informed me that he had been given a copy of a painting owned by the Kennel Club which depicted one of the very first dog shows which took place at the Queen’s Head in its previous building. The current pub dates from 1928 when the Piccadilly Theatre next door was built. A copy of this painting hangs in the back of the pub. I confess I haven’t been recently but hope it’s still there. As the Kennel Club hold the copyright to this painting I can’t post it here but can link to the page where you can see it early-canine-meeting-10644868.html

So anyway back in 2012 I put together a walk taking in the history of Soho’s pubs including lots of info related to this painting. Jemmy Shaw who is the chap standing in front of the fireplace was a retired lightweight pugilist and before showing dogs in pubs was involved in the rather unsavoury sport of ratting. According to Henry Mayhew’s London Labour and the London Poor some 70 pubs had regular ratting meetings. Shaw was known as Mr Ratting! 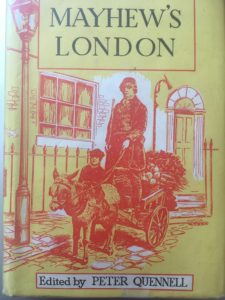 There is absolutely tons of information about this ‘sport’ in Mayhew’s book under the title ‘A Night at Rat-Killing’. Although the pub’s name isn’t mentioned it is implied that the proprietor is Jemmy or Jimmy Shaw.

Dog owners who wanted to prove their dog could kill x number of rats in a specific time would advertise in the newspapers. An event would be set up and bets would be taken as to whether said dog would achieve this.

There were rules and regulations surrounding these events. There would be an umpire and a timekeeper. Sometimes owners would sprinkle pepper on their dogs to try to stop the rats biting. It then became a rule that dogs should be bathed in milk or water before the match and the opposing side were invited to lick the dog to check this had been done.

Jemmy Shaw also had a sideline in providing rats for these events and at any one time had 2,000 rats on his premises. Barn or country rats were more expensive than town or sewer rats but they were better for the dogs. As would be expected sewer rats stank to high heaven and could also pass on infections to the dogs. Jemmy worked with local rat catchers such as Jack Black who described himself as Rat Catcher to Queen Victoria. Mayhew interviews him too and he describes how he melted down his wife’s saucepans to make the rat ‘decorations’ on his outfit. 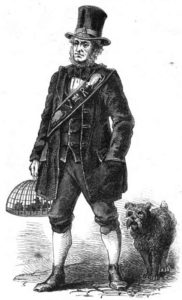 Another Quennell book I have – Mayhew’s Characters – has an interview with Jemmy Shaw where he mentions that most of his ‘country’ rats come from Clavering in Essex and also Enfield which he describes as ‘a kind of headquarters for rat-ketchers‘!

Preparing for my talk to London Historians I decided to do a bit more digging about Jemmy Shaw as a person. He is all over the newspapers of the time. He had been a boxer and then went into ratting and showing dogs. He died of ‘softening of the brain’ in 1886 at the Metropolitan Asylum in Caterham and is buried in Brompton Cemetery. He was in his seventies.

Searching “Jemmy Shaw” on British Newspaper Archives I’ve found his obituary in The Sporting Life of 11 January 1886, page 3. The obituary lists his sporting achievements including the pubs that he ran. Another of his pubs was the Blue Anchor, Bunhill Row – today the Artillery Arms. A picture in the Museum of London’s collection shows ‘Tiny the Wonder Dog’ in action at this venue. meet-beast-tiny-wonder-dog

From studying some old maps Queen’s Head Court appears to have been south of Archer Street close to where the Lyric Theatre is today. I need to do more research as to exactly where it was and when it was demolished.

The newspaper report says that Jemmy Shaw bought the pub from Jem Burn. I have also discovered that Shaw had a son called Billy. The evidence is here on the Pubs History website:

Information for the Queen’s Head, Denman Street (then Queen Street) for the same period: 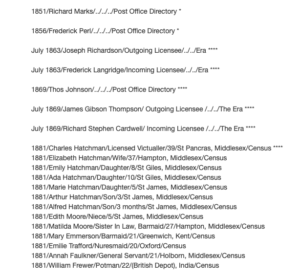 So I have two dilemmas. Firstly whether I should tell the Queen’s Head Denman Street – and in fact the Kennel Club – that they have been referring to the wrong pub. The second dilemma is whether I need to entirely change my walk to find another site in Soho to talk about these unsavoury goings on or whether I could include the above info as to how I came about this misapprehension. Maybe that’s a story in itself!

The author of this blog (Joanna Moncrieff) is a qualified tour guide and leads walks in the West End, Islington, Walthamstow and Chingford.
Details of all Joanna’s walks bookable by groups can be found here
Search