Having lived in Waltham Forest most of my life I have walked up and down Church Hill Walthamstow many times and sat on the top deck of many buses on that route too. So how is it that I have never before noticed this house on the corner of Stainforth Road. 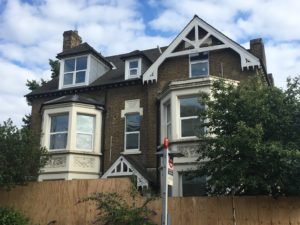 What I noticed first was the ornate design underneath one of the windows. 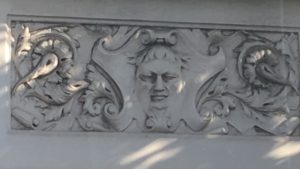 Until earlier this year Welham House aka 12 Church Hill housed both a Barnados office and Waltham Forest Music Service.

The house is sadly boarded up but on checking the council’s planning applications I see approval has been granted for it to be converted into flats (1 studio, 5 one bedroom and 1 two bedroom). At least it’s not being demolished or left as a façade. Reading the planning application documents makes me wonder how closely the applicants have looked at the house. Immediately obvious on the front of the house is the wording ‘Welham House 1893’ yet one of the planning documents suggests it is Edwardian or late Victorian. Edward VII didn’t come to the throne until after his mother’s death in 1901!

But my inquisitiveness didn’t stop there. I wanted to find out who was the Welham who built this rather grand looking house. 1893 is 23 years after the railways had arrived in Walthamstow and many of the rich had scarpered. As mentioned in my recent post about little known philanthropist John Francis Holcombe Read the cheap workmen’s fares which were applicable for all stations up to Wood Street meant rapid house building in Walthamstow. The population of Walthamstow increased exponentially between 1851 and 1901. In 1851 the population was around 5,000. Fifty years later its population was around 95,000. The population of nearby Chingford which was beyond the boundary for cheap workmen’s fares increased from just 963 to 4,373 and the house building was on a very different scale.

Ten years on in the 1911 census Thomas Welham is described as a gentleman and is still living there with his wife, son and his widowed father-in-law. His widowed mother Ellen is a visitor alongside Gertrude Pluckrose another visitor.

Twenty years previous to that it was a different story. Thomas Welham was running a pub – the Coach & Horses in St James’s Street Walthamstow. He was living there with his wife, son, niece aged 6 and 3 servants.

So what prompted their change of fortune.

Through the online records of Waltham Forest Family History Society I discovered some of the family are buried in a rather grand tomb in Queen’s Road Cemetery. Not only is this quite impressive to look at but it is on the main path, close to the entrance to the cemetery; it must have cost a packet. 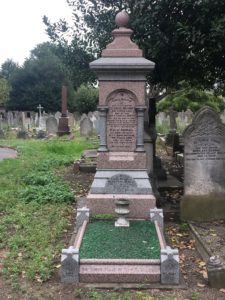 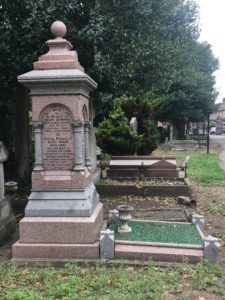 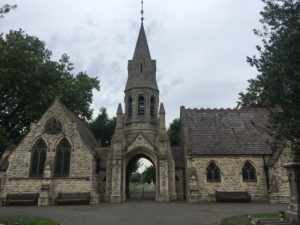 Queen’s Road Cemetery. Walthamstow. The edge of the Welham vault is just visible to the right of the photo.

I was beginning to get quite addicted to this research which initially had no purpose for me. Although the Church Hill house is on my ‘From Monoux and Morris to Beer and Bacon Jam’  walk route I would have to drop something else from the walk in order to fit this story in. But still I continued researching

Discovering the location of the tomb was however fortuitous. I am currently putting together a new Walthamstow walk ‘Penny Loaves, Poisoning, Poverty and Pubs’ which I am leading for the Queen’s Boundary Community on 31st August. Perfect. The tomb is close to the entrance to the cemetery which features on my walk and there is a pub connection. My research hasn’t been wasted.

Whilst delving into their story I discovered that Thomas’s mother had rather a sad life. Clarissa Ellen Welham who died in 1912 is separately buried in Queen’s Road Cemetery with 2 of her grandsons. All 4 of her grandsons from her daughter of the same name pre-deceased their grandmother.

Her daughter’s husband Robert Girling Norman (not buried here) committed suicide in 1888 at the Chester Arms, Albany Street, Regent’s Park.  The inquest verdict was “Suicide when of unsound mind induced by habits of intemperance.” It was reported in Lloyd’s Weekly Newspaper in August 1888 0004

Her grandson also called Robert Girling Norman drowned in the River Lea in Summer 1909. It was a very hot day but the coroner recorded that there was a history of insanity in the family. The verdict reached by the jury was ‘Found drowned’ holding that the evidence was insufficient to show how he had reached the water. Robert Girling Norman lived in Borough so it would have been quite a journey to reach the Lea. A full report of the inquest can be found in the East London Observer on 21 August 1909. 0002

I have been unable to find out how his brother Charles Girling Norman died; he was only 25. The last person in this tomb is Ellen Hyde. After her husband’s suicide Clarissa Ellen’s daughter married a Richard Hyde. I have spent too long trying to figure out their relationship but surmise that Ellen was in someway related to Richard.

There was also another brother not buried here. John Girling Norman died aged 34 in 1910. His widow age 24 was left to bring up 3 children under 7 by herself.

John Girling Norman was a publican too. He is buried in Chingford Mount Cemetery. His widow Alice (nee Bolwell) is separately buried in Queen’s Road Cemetery with members of her Bolwell family. Details here Queen’s Road Cemetery is rather overgrown and as you can see from the picture above and those below of unrelated graves the ground was totally unsuitable for a cemetery in the first place. I was unable to find the grave of grandmother Clarissa and her grandsons although I know it is in the same part of the cemetery. 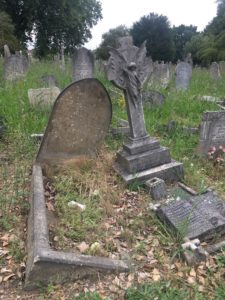 I originally started this research with the hope of discovering the story behind the house. Instead my research has taken me in many different directions. Although I still haven’t discovered how the building of Welham House came about this has been a bit of an eye opener into the hard lives suffered by the wider Welham family.

Although I would still like to know more I need to wean myself off this subject and concentrate on the rest of my walk research. If you would like to join me there are currently just 5 places left for this walk on 31st August 2019. If you can’t make that date I could of course lead it on future occasions. Get in touch by emailing Joanna [at] westminsterwalks [dot] London if you’d like to book me to lead this as a private walk.

The author of this blog (Joanna Moncrieff) is a qualified tour guide and leads walks in the West End, Islington, Walthamstow and Chingford.
Details of all Joanna’s walks bookable by groups can be found here

4 Responses to The Welhams of Walthamstow